Views towards St George the Martyr in Borough High Street were at the centre of arguments in the closing session of a public inquiry into a new 17-storey development at the northern end of Great Dover Street. 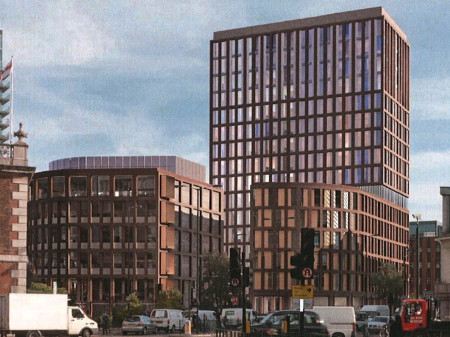 Helical Bar says this is "a high quality, imaginative and forward-looking scheme" 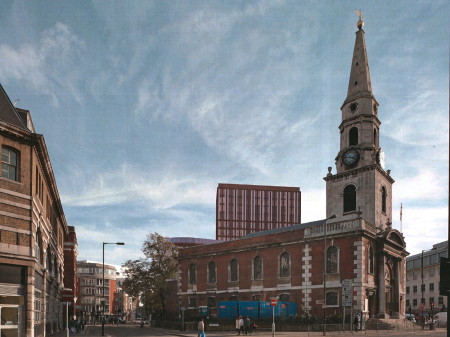 The proposed development, designed by Lifschutz Davidson Sandilands, includes 237 student bed spaces as well as a larger volume of office space than the existing building.

Developer Helical Bar lodged an appeal against the council's decision and planning inspector John Papworth has presided over a public inquiry at Southwark Town Hall which began last week.

On Thursday the two main parties at the inquiry, Helical Bar and Southwark Council, gave their closing submissions.

Daniel Kolinsky for Southwark Council said that the development's impact on the view of the grade II star listed St George the Martyr church from Borough High Street "will be particularly damaging".

He said: "At present, there is an unusual and beneficial opportunity to appreciate the church as a whole composition with the spire experienced against open sky together with the horizontality of the nave of the church.

The development, he claimed, would "unsympathetically intrude" on that view.

Mr Kolinsky said: "The council endorses the observations of English Heritage and the Greater London Authority that the design of the tallest element is unsuccessful and simply compounds its incongruous scale and adverse relationship with the listed church."

Later, he said: "One apparent difference between the parties was the issue of how the church operates as a landmark. The appellants sought to limit the significance of the church as a landmark to its spire alone."

There was also disagreement as to whether the site met the requirement of Southwark's planning policy that tall buildings should be located at points of landmark significance. Mr Kolinsky pointed out that "the tallest element of the scheme is located on Silvester Street which is not an important route in anybody's analysis".

Mr Kolinsky concluded his submission by saying: "In substance, therefore, none of the claims made as to the advantages of the site can come close to justifying the harm which the council contends will result from the proposed scheme and there is no support in any of the policies relied on by the appellant for a proposal which causes such harm."

Andrew Fraser-Urquhart, for Helical Bar, argued that the existing building is outdated and "has a negative impact on the local environment".

He said that there is "compelling evidence of a very considerable need" for purpose-built student accommodation in Southwark.

Mr Fraser-Urquhart went on to dismiss the representations made by local residents that the development of new student accommodation in north Southwark had reached saturation point.

"The case deployed by the residents appeared to consist first of anecdotal evidence as to difficulties suffered by them in respect of existing students in the area and secondly of an analysis of the statistics to suggest that Cathedrals and Chaucer wards would find themselves which student populations which were a 30.04 per cent and 14.06 per cent proportion of their total populations," he said.

He went on to describe the residents' evidence as "entirely inchoate" and insisted that there was nothing to suggest that the arrival of more students living in the area "would have any deleterious effect".

Mr Fraser-Urquhart also pressed the economic benefits of an influx of students: "A potential spend of approximately £6,500 per annum per student represents a considerable and worthwhile new contribution to the local economy," he said.

Turning to design issues, he said that his client had "engaged one of the country's leading architectural practices" and had approached the design of the buildings "with the utmost care and seriousness".

Mr Fraser-Urquhart claimed that the "high quality modern development" "serves to enhance the setting of the church".

"The form of the appeal buildings, stepping back from the boundary with the church, with the tall student block at the rear evokes both the body and the tower of the church," he said.

Concluding, he told the inspector: "Overall, this is a high quality, imaginative and forward-looking scheme. The appellant has amply demonstrated to this inquiry that it entirely worthy of the grant of planning permission."

The final decision is now in the hands of Mr Papworth.