The London Green Party has called for normal opening hours to be restored at the Guy's Hospital minor injuries unit nearly a year after 'temporary' cuts to the service were introduced. 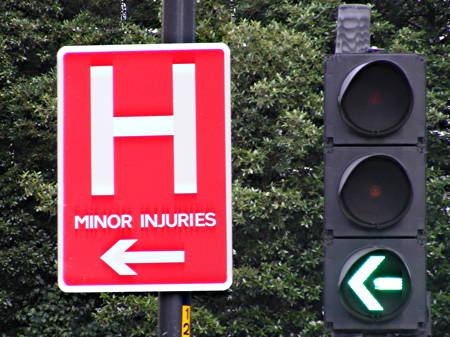 If you have an injury near London Bridge after 3.15pm you're out of luck at Guy's Hospital

Last March Guy's and St Thomas' NHS Foundation Trust cut the hours of the minor injuries unit at Guy's Hospital so that it closes at 4pm instead of 8pm.

Hospital bosses explained the change as a temporary measure to enable it to send extra staff to the accident & emergency department at St Thomas' Hospital which was struggling to meet Government targets on waiting times.

"The cuts to this service are having a major impact on people living and working locally," says Noel Lynch, chair of the London Green Party.

"Minor injuries can become serious health problems if left untreated. A bone breakage can turn into gangrene for instance.

"People are already deterred from visiting crowded A&E departments, and now they will be even less likely to visit their local minor injuries unit if they think they will not be seen. Most people don't go to hospital unless they really have to.

"Over the full year admissions are likely to be down by about 25 per cent. The minor injuries unit provides a valuable service and has a great potential to alleviate pressure on accident and emergency wards and other NHS resources.

"Instead it is seemingly being wound down with no end in sight to this allegedly temporary cut in opening hours. Normal opening hours should be resumed as quickly as possible."

The London SE1 website asked the hospital for comparable admissions figures for A&E at St Thomas' for the past four years but the press office refused to provide the information and we were asked to submit a request under the Freedom of Information Act instead.

Guy's and St Thomas' NHS Foundation Trust declined to comment on the future of the minor injuries unit.

It seems likely that the current service will be replaced by a walk-in urgent care centre staffed by emergency nurse practitioners and GPs.

NHS Southwark last week published the report of its recent consultation workshop on the future of the health service in Bermondsey and Rotherhithe.

According to the document, "NHS Southwark has agreement with Guy's that we can use the MIU site to develop an urgent care centre which will be open 8am – 8pm, 7 days a week.

"We hope to progress these discussions and introduce an enhanced primary care service in 2011/12."