Once Upon A Wartime at the Imperial War Museum 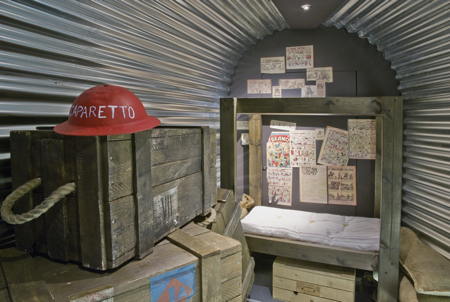 Once Upon A Wartime at the Imperial War Museum explores themes of loyalty, separation, excitement, survival and identity in five books.

War Horse by Michael Morpurgo is the story of Albert's farm horse who goes to war with the British Army, is captured by Germans and eventually returns home. The set has a wooden horse used for training recruits in the First World War and dramatic film footage of horses pulling cannons over ditches and galloping through rivers.

A model GWR train represents the young evacuee's journey from London in Nina Bawden's Carrie's War. The book has been read this term by a class at nearby St Jude's Primary School who visited on the first day.

They were delighted to see Carrie's case with a copy of The Magnet and a current bun to keep her going on her journey. The teddy bear is the author's own. The Welsh kitchen Carrie came to know is recreated complete with a Hovis loaf and huge kettle.

The Machine Gunners by Robert Westall offers scope for displaying German loot from a downed aircraft. In an air raid shelter you can try on a very heavy 'tin' hat and read comics featuring Lord Snooty and His Pals and Tin-Can Tommy.

Poles will be particularly interested to see the background material on Warsaw in The Silver Sword zone. Ian Serrailler sets his story mainly in the old city which disappears in the bombing.

Bernard Ashley's Little Soldier tale is about a child soldier in the 1990s. It features both Charlton and an African war which allows for contrasting pictures.

Children will have much to engage them throught out this good value show and at the climax they will find among yards of fake Biggles books there are some on the shelves which are real and can be removed and read on the long seat.