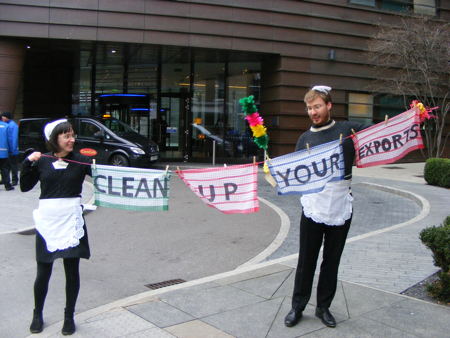 The campaigners, dressed as French maids, gathered on Tuesday morning to demand that governments to "clean up their exports".

"The UK's export credit agency, the ECGD, operates under a cloak of secrecy, participating in a global race to the bottom on ethics and using taxpayers' money to back business deals which have racked up billions of pounds in Third World Debt."

Speakers at the three-day ExCred-21 convention include David Craig, manager of ECGD Project and Structured Finance.

The Jubilee Debt Campaign is the UK coalition campaigning for cancellation of unjust and unpayable poor country debts.