A woman who targeted a passenger at Waterloo Station before stealing her purse has been jailed for 15 weeks. 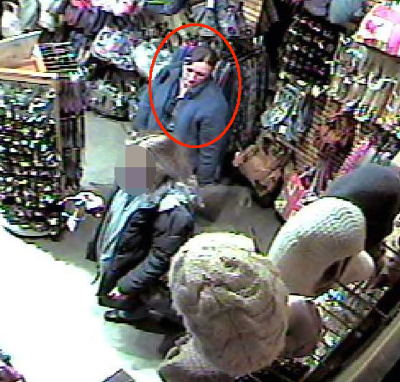 CCTV captures O'Neil (circled) standing next to the victim in Accessorize

46-year-old Ashley O'Neil from Tolworth was sentenced at City of Westminster Magistrates' Court on Thursday 24 February after pleading guilty to theft.

"The victim was browsing in the Accessorize store at Waterloo Station when she noticed a woman, later identified as O'Neil, standing unusually close to her on several occasions," said DC Lucker.

"After leaving the shop the victim, a 42-year-old from West Hampstead, realised her purse had been stolen and immediately called police.

"CCTV from both the shop and station concourse showed O'Neil using handbags from the shop display to disguise her hand movements before stealing the victim's purse from her bag."

The CCTV stills were circulated on police intelligence systems and O'Neil was arrested on 11 February after plain-clothes BTP officers on an anti-theft patrol spotted her at a bus stop outside Waterloo Station.

When questioned in custody O'Neil admitted stealing the purse and its contents, claiming that she was tempted after seeing the purse in the victim's handbag and had made a spur of the moment decision to take it.

She said there was little money in the purse and that she had discarded it on a bus soon afterwards.

DC Lucker added: "Pickpockets' typical tactics are to target people in any crowded space that allows them to get close without being noticed.

"As in this case, they look for open zippers on bags, and will help themselves to wallets and purses that are visible in pockets.

"Having cash, cards and identification stolen is not only costly but extremely inconvenient.

"We have plain-clothes officers out on anti-theft patrols to spot this type of suspicious behaviour and arrest the culprits, but we also want people to be more aware of the tactics thieves use and to take steps to protect their belongings, reducing their chances of becoming a victim."

Members of the public can report pickpocketing on the railway to British Transport Police on Freefone 0800 40 50 40.