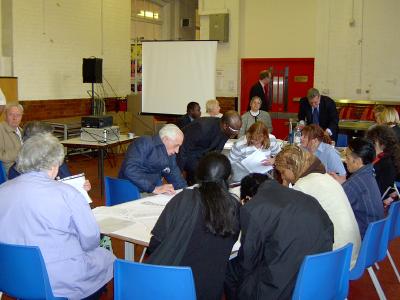 The MP, who said he had waited 25 years for this innovation, claimed that many who do not relate to the Town Hall will be able to take part in local decision-making.

The meeting in Charles Dickens School in Lant Street discussed the positioning of 150 new litter bins and 40 new trees. Council Officer Tim England gave a short presentation on Crime and Grime highlighting how Southwark Cleaning is trying to tackle rubbish and graffiti problems.

Sarah Newton reported on crime figures which confirmed that SE1 has the highest crime rate in Southwark. Two Community Officers will be supporting the Police on Bankside from this month.

From next month planning applications will be considered by the Community Council which will meet ten times a year – monthly except in August and December – and have spending power. The next meeting is on Wednesday 4 June.