Mayor of London Boris Johnson has announced plans to commemorate the third anniversary of his arrival at City Hall with a 40 ft bronze statue of himself in Potters Fields Park. 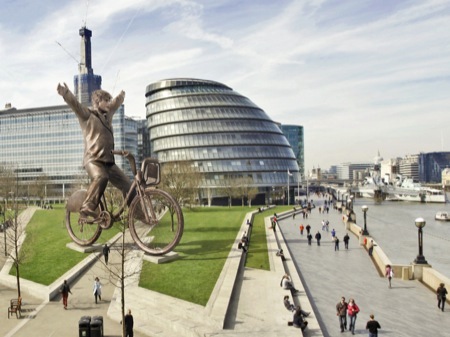 "Boris regards this as his gift to the people of London to commemorate a marvellous three years," said a senior City Hall source last night.

The design, featuring Boris astride a Barclays Cycle Hire bike, was chosen after a private competition masterminded by the mayor himself.

"The mayor invited designers from around the world and picked the winner today," said the source.

The statue will be visible from City Hall so Johnson's successors will be reminded of his legacy.

"Boris has a very clear vision and we face a real race against time to have the statue constructed in time," says Gregg Stone of winning designers Dowling Jones & Stone.

"We will be working around the clock."

The London SE1 website understands that neither Southwark Council nor the Potters Fields Park Management Trust have been consulted about the proposed statue.

12 noon update: APRIL FOOL! Sincere thanks to Gregg Stone for the image and the idea.