Estate agents 'Cameron, Clegg & Lansley' held a viewing of a prime riverside residential property at St Thomas' Hospital as part of an April Fools' Day stunt by the UNISON union. 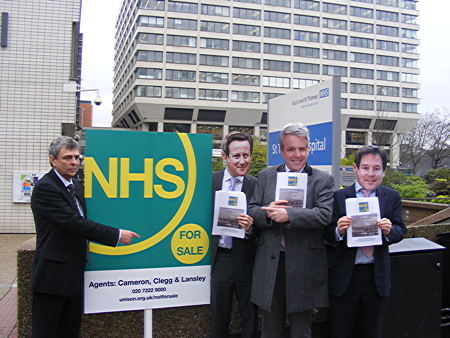 "Selling off the NHS is no joke – but that's exactly what's the Health and Social Care Bill paves the way for," said UNISON general secretary Dave Prentis.

"Even the Tories are waking up to the toxic prescription that the Health and Social Care Bill really is for our NHS.

"Handing over Ł80 billion to GPs is a reckless gamble. Doctors don't want it, and it will poison the relationship between patients and their GP.

"Who wants to be sitting across from their doctor wondering if the treatment they are prescribed is what they need, or what the GP can afford to pay for?

"And taking the private income cap off hospitals when they are being hit with cuts is a recipe for disaster. Patients who can pay will be the top priority. NHS patients will be pushed to the back of the queue – eroding the core principles our NHS was founded on."

Health secretary Andrew Lansley said on Friday: "Our commitment to the values of the NHS is providing high quality care for everyone and ensuring nobody is excluded from getting the treatments and drugs that their doctors think will help them."

On Friday afternoon campaigners from trade unions are expected to hold a protest outside the Bermondsey office of Simon Hughes MP urging him to vote against the coalition's health reforms.