Detectives are appealing for witnesses to come forward after a woman who was seriously injured in a traffic collision on London Bridge on Thursday morning died in hospital. 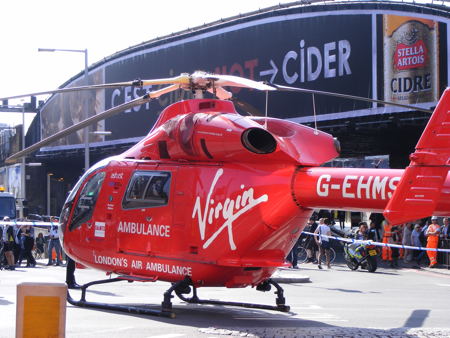 The air ambulance landed at the south end of London Bridge

Police were called at about 8.40am on Thursday to reports of a collision between a motorcycle and a pedestrian on London Bridge.

London Ambulance Service and the London air ambulance helicopter were called to the scene and the pedestrian, a 47 year old woman, was taken to an east London hospital for treatment where she died from her injuries on Thursday night.

The woman's family have been informed but she has not yet been formally identified.

The rider of the motorcycle stopped at the scene. He was taken to a south London hospital for treatment for a shoulder injury. He has now been discharged and is in a stable condition.

Anyone who may have witnessed the collision is asked to call the witness line at the road death investigation unit on 020 8285 1574 or call Crimestoppers anonymously on 0800 555 111.