Government Inspector at the Young Vic is a heady mix of surrealism, slapstick and satire. 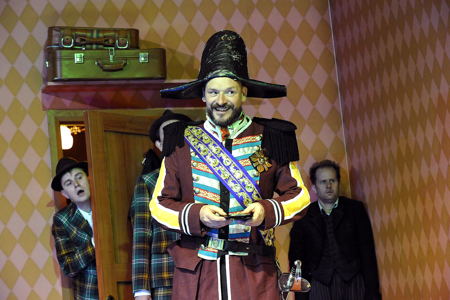 This is nineteenth-century Russia, but not as you would expect it. Everything about this production of Nikolai Gogol's play The Government Inspector, modernised by playwright David Harrower, is outlandish and larger-than-life.

Presumably Gogol himself would have approved; when he set out to write the play his aim was allegedly to make it 'funnier than hell'.

The action takes place in a small town in the far reaches of Russia; it is, as one character puts it, 'a pimple on God's arse'. Nothing of note has ever happened here, aside from the exchange of euphemistically-named 'loans'.

Therefore, the arrival from Saint Petersburg of Khlestakov, the suspected Government official, is greeted with as much excitement as if it were the Tsar himself. The townsfolk hang off every one of his outrageous and ludicrous claims, part in awe of his affectations and part in fear that their unsophisticated misdemeanours will be exposed.

Government Inspector is visually brilliant. From the moment that the audience members are ushered through a series of narrow, garishly-decorated rooms, to the quirky and comic visual touches, such as the Tsar-emblazoned three-piece suite, the staging is an integral part of the casting and receives as many laughs as any other character.

The scene changes are particularly excellent, accompanied by a soundtrack which evokes Russian folk music whilst also heightening the surreal atmosphere of the production. Thankfully though, the surrealism is turned up and down as required; only in one nightmare-like scene does the play – quite deliberately – lose all touch with reality.

Julian Barratt, in his stage debut, is perfectly cast as the paranoid and fearful Mayor. The rest of the cast are also faultless and their interaction has been choreographed to comic perfection.

This play was always going to attract a certain amount of attention, given its high-profile casting. However, without a doubt, it lives up to it.