In the Penal Colony at the Young Vic

This production by an independent Palestinian theatre company imbues Kafka's short story with modern day resonance and makes a statement without being too overtly political. 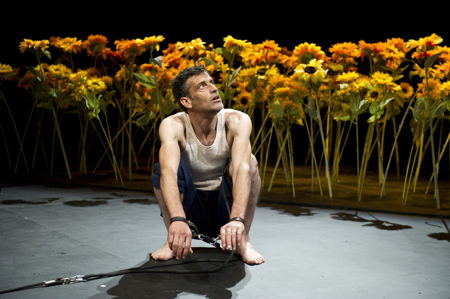 The Young Vic's staging of In the Penal Colony follows not long after its second run of Kafka's Monkey. Both were (to state the obvious) Kafkaesque, with their themes of human suffering and primitiveness, and undercurrent of black humour. Yet In the Penal Colony is an altogether more uncomfortable watch.

The play revolves around three characters; The Executioner, The Prisoner and The Visitor. The Prisoner has been condemned to death for a relatively minor crime, and the punishment is due to be carried out by machine which will slowly and painfully inscribe the moral of their crime upon their skin. For The Executioner (for whom the phrase judge, jury and executioner could have been written), the killing machine represents the glories and ideals of the past regime. He therefore treats it with submissive reverence and truly believes that its barbaric act creates a state of epiphany in its victim. Stacks of chairs on stage are symbolic of the hundreds that also used to come to watch past executions. However, The Visitor and the audience see the punishment for what it is; grotesque and unjust.

In the Penal Colony is spoken in Arabic, with English surtitles. The use of Arabic enhances the production's authenticity, whilst the stark, written words emphasise the mechanical and inhuman nature of the machine. The play takes place on what initially looks like a rather cheerful stage, containing a field of sunflowers and a childlike structure. The reality is soon revealed in graphic detail and Taher Najib brilliantly plays the role of the condemned Prisoner, writhing in agony as the machine begins its work.

This is by no means any easy watch. It is brutal and unflinching. However, this was presumably Kafka's intention and is ultimately reflective of reality in modern day Palestine. On the basis of the success of Kafka's Monkey and In the Penal Colony, the Young Vic should look to stage another Kafka in the not too distant future.