The Beauty Queen of Leenane at the Young Vic

This dark comedy proved so popular on its first run, it has returned to the Young Vic for a second dose of shock-a-minute drama. 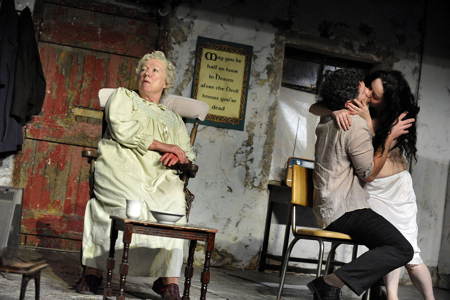 The premise of The Beauty Queen of Leenane is not instantly appealing. An ageing mother and her adult daughter manipulate and connive against one another, stuck in that most clichťd of miserable places, rural Ireland. The publicity shots of an elderly woman sipping tea don't help. And as the action unfolds, the play does not become much more appealing. But the humour and appeal of the production lies in the fact that it truly is that bleak and desperate.

There's a sense that place is as much to blame for the drama that unfolds as personality is. The setting is the early 1990s, but it may as well be anytime in the past century. The staging oozes a sense of time stood still. There are no jobs or prospects for the inhabitants of Leenane and the only hope lies in England or America. The village is described vividly as the type of place in which you couldn't kick a cow without someone holding a twenty year grudge. Little wonder the characters are driven to extreme eccentric behaviour and, ultimately, insanity.

It is only a year since the production was last seen at the Young Vic. Rosaleen Linehan, who plays the show's star Mag, is the only member of the cast that remains the same. Linehan provides a truly grotesque performance, portraying a woman who delights in her unsavoury ailments and behaviours. It is clear to the audience that Mag is fully cognisant and able but she plays the role of senile pensioner even better than Rupert Murdoch managed in his recent parliamentary appearance.

Derbhle Crotty is so brilliantly cast as Maureen, the dowdy and downtrodden daughter of Mag, one struggles to wonder who else could have filled the role. The stripped-down, bitter-sweet performance is often difficult to watch and Crotty has the sympathy of the audience throughout. In fact, it is rare to find an audience so engrossed and personally invested in the drama; gasps and cries of despair were audible throughout.

The plot and characters of The Beauty Queen of Leenane are exaggerated and larger than life, but the revival continues to work thanks to fantastic acting from its ensemble cast who imbue it humanity and realism.