The Globe Mysteries at Shakespeare's Globe opens with a group of hoodies who soon show their faces as many characters in an exciting three hour religious tableau. 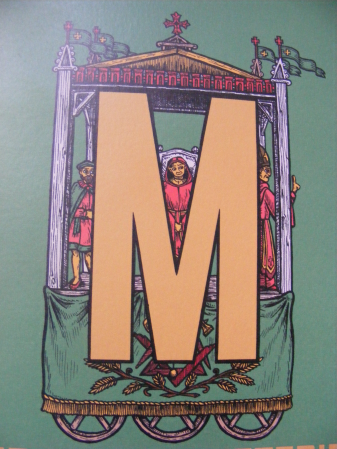 The production's programme, which is worth buying on arrival, includes a picture taken in 1977 of Mark McManus on the South Bank riverside path playing Christ in the York Mystery Plays staged by the National Theatre.

A cross can often be seen carried past the riverside Globe on Good Friday having started out at Southwark Cathedral. That is where the Southwark Mysteries are staged every ten years so this production had to be called the Globe Mysteries.

It's an appropriate time to see the Globe Mysteries for this comes the year after John Constable's Southwark Mysteries have been seen again and as the Festival of Britain, which revived the ancient mystery plays of Chester and York in 1951, is this summer recalled at the Royal Festival Hall.

But do mystery plays have anything to do with Shakespeare's Globe? Yes, William Shakespeare almost certainly saw the Chester or Coventry version at the age of about twelve just before the Reformation finally brought the tradition to a long halt. It is claimed that this had a discernible influence on the young Shakespeare.

The original plays were written to be seen at successive locations around a town. The Globe is half outside like a guild hall or minster porch.

You might say that poet and playwright Tony Harrison plays fast and loose with the Bible stories of the creation, flood and Christ's birth, death, resurrection and ascension. But suddenly you find that the compression does not just keep a fast pace but is based on a thorough reading.

Also, deep thought has been given to the staging. When Christ carries his cross it is not as in 1977 on the South Bank. At the Globe he now carries just the crossbar which is what many scholars think really happened. It would have been very heavy as William Ash playing the part suggests. So convincing is he at this point that when he passes through the audience and falls two people instinctively bend down.

Last week Pope Benedict said that most Christians do not read the Bible as indeed they did not, because they could not, in the Middle Ages either. This play might make you want to. But a knowledge of the mystery play tradition, as told in the programme by Richard Beadle, will certainly help one to appreciate the Globe Mysteries.

This is a new play. The Southwark Mysteries mentions Costcutter but the Globe Mysteries may be the first to include references to George Bush and Tony Blair. Those erecting the cross use a mobile phone to photograph each other in front of the crucified Christ.

The court jester is Lucifer played with much energy by Paul Hunter. He is also a shepherd, Herod, blind man and Doubting Thomas. John Stahl is a wonderful Noah and a boastful Barabbas who manages to be booed off the stage by the audience.

The costumes are a mixture of today and the slightly exaggerated as with the Magi who look as if they should be in a Three Kings street procession on Epiphany Eve in Spain.

The climax, before God's summing up, is the Assumption which makes the play very much in season since churches celebrate the summer feast in mid-August.