Plans for a new floating walkway on the north bank of the River Thames - a pet project of Mayor of London Boris Johnson - have been criticised by the Government's design watchdog CABE. 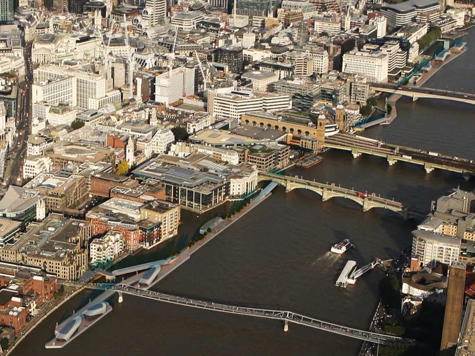 When Gensler's concept for the London River Park won the Mayor's award at the London Planning Awards in January few people expected it to be built.

In May the Mayor of London Boris Johnson announced that up to Ł60 million funding had been pledged by Venus Group of Singapore to enable the project to be completed for summer 2012 to coincide with the Queen's Diamond Jubilee and the Olympic Games.

The backers will recoup some of their investment from corporate events held in a series of pavilions on the pontoons.

City Hall said that a memorandum of agreement had been signed that will see 30 per cent of net revenues raised through the commercial operation of the London River Park shared with the Mayor for the public benefit.

A planning application for the walkway was submitted in early August and since then dozens of objections have been raised by individuals and organisations on both the north and south of the Thames.

Gensler hopes that the planning application will be considered by the City of London Corporation's planning commitee in mid-November.

The scheme's backers have already spent Ł3.35 million working up the proposals.

This week CABE published its design review of the scheme.

"We support the concept of a temporary park on the River Thames; it has the potential to be a significant asset to the City of London during the Queen's Diamond Jubilee and 2012 Olympic celebrations," said the design review panel.

"However, if this project goes ahead we find there are significant issues that need to be addressed, prior to a temporary planning permission being granted, to make this project a success.

"Further thought should be given to the overriding concept of the project, the design quality of the structure and its impact on the historic setting, the detailed landscape design, access and servicing and the impact upon ecology and archaeology.

"We also think sustainability should be more prominent in the design of the scheme."

The scheme has drawn the ire of many Bankside residents and organisations.

Architect Graham Morrison (of Allies and Morrison) has written a letter on behalf of 30 of his Clink Street neighbours setting out 12 reasons why the "under-researched and premature" planning application should be refused.

"This proposal came from a whimsical idea. It was a bold thought that carried with it some interesting possibilities. That, however, is as far as it should have got. We don't begrudge the prize that the Mayor awarded to the architects, nor do we object to creative and positive thinking to solve some of the problems of the north bank of the river," writes Mr Morrison.

He argues that the original concept of a continuous riverside path has been chipped away to the extent that it is a thin veil for the "real purpose" of the application: "That is to provide a platform for commercial pavilions using and exploiting the river for profit."

Archaeologist Dr Fiona Haughey, chair of the Bankside STEWards group which protects the southern foreshore between Blackfriars and London Bridge, has warned that the new pontoons will have an irrevocable effect on the historic structures and deposits to be found on both sides of the river.

She cites the example of the construction of Bankside Pier which she says has accelerated the erosion of the foreshore in front of Shakespeare's Globe.

Val Shawcross, London Assembly member for Lambeth and Southwark, has also written to the Corporation of London to object to the planning application.

"It is my experience that noise travels across the river very easily and that its effects are amplified by the the water surface and hard landscaping on the river bank. Noise from events on this walkway will be damaging to the health and quality of life of my constituents," she wrote.

Ms Shawcross also expresses concern about the difficulty of resolving noise disputes which cross a borough boundary. "The environmental health teams and licensing authorities are accountable to a political institution not answerable to the affected community."

Shakespeare's Globe has raised concerns about noise from late night revellers interfering with its open-air theatre performances. "Experience has shown us that sound travels in peculiar ways across the river," says commercial director Mark Sullivan.

Cathedrals ward Lib Dem councillors Adele Morris and David Noakes have also submitted objections. Cllr Noakes says that he is concerned that "the timetable for consideration of this application appears to be driven by the developer's commercial considerations relating to major events and celebrations in 2012 … rather than allowing a considered application to submitted that comprehensively addresses the merits of the scheme supported by informed studies and surveys of the full impacts of the application on the river".

Bankside Residents' Forum has called for the application to be refused, and Southwark Cathedral has also written to the City corporation endorsing the concerns raised by local residents.

Southwark Council has stopped short of tabling a formal objection although it has asked that City of London planners take full account of the issues raised by Bankside residents and businesses.