10 years of the Southwark Playhouse

Bankside fringe theatre Southwark Playhouse began its 10th anniversary celebrations on Wednesday with a gala night for friends and volunteers. 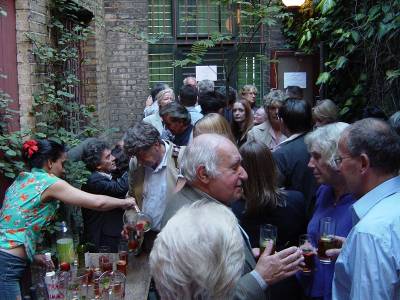 Kath Serkis of the Playhouse team said it was to thank those who have supported the theatre: "We wanted to recognise everyone who has helped us – from the volunteers manning the box office and bar, the ever-supportive trustees and our sponsors, to the regular theatre attendees."

The guest audience gathered in the leafy courtyard to enjoy Pimm's on arrival before going inside to watch the in-house musical production of Blackbird which, rather appropriately, stars co-founder and Chief Executive Juliet Alderdice. Following the performance the theatre doors were opened onto the courtyard where the guests dined on Caesar Salad courtesy of Bankside Restaurant.

Co-founder and Education Director Tom Wilson and Chair of the Trustees Bob Chapman formally thanked the guests for their support. "This is a celebration of all who have helped the Playhouse," said Tom. "I had no idea how it would turn out 10 years ago but it is infinitely better than I could have imagined. That is down to the loyalty of our supporters."

The summer production of Blackbird by Claire Luckham was specially commissioned for the Playhouse. It explores betrayal, self-denial and grief in the Garden of England and is showing until 28th June. For tickets call the box office on 020 7620 3494.