British Transport Police officers are asking for witnesses to come forward after a man was sexually assaulted in the toilets at London Bridge Station last month. 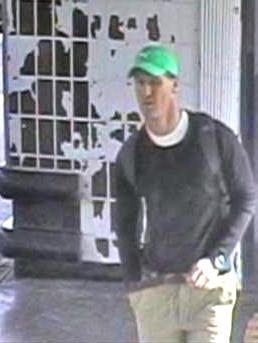 Officers have released CCTV images of a man they would like to speak to in connection with the incident which happened near platforms 1 and 2 at 1.25pm on Saturday 29 October.

Detective Constable Andy Parkinson is asking for anyone who recognises the man, or who may have information about the incident, to come forward.

"The victim, a 33-year-old man from Bexleyheath, was standing at the sink washing his hands when he was approached from behind by another man who touched him inappropriately before pushing him against a wall," says DC Parkinson.

"The suspect apologised to the victim, who left the toilets in a bid to alert rail staff, but when they returned they found that the suspect had fled the scene."

"We know from our enquiries that after the man left the toilets, he used the escalators and left the station via Duke Street Hill."

DC Parkinson said that the man is described to be around 6'1 and to speak with a South African accent.

"If you know this man, or if you are the man himself, we would like to speak to you," he said.

"This type of offence is very rare on the railway but when we do receive such reports, BTP takes this crime very seriously.

"If you were at London Bridge station and have any information, I urge you to get in contact and assist us with the investigation."