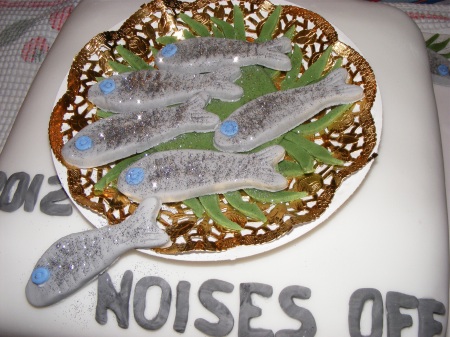 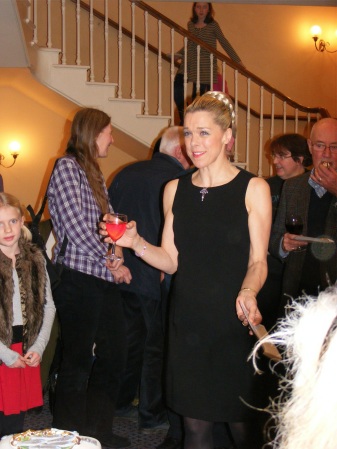 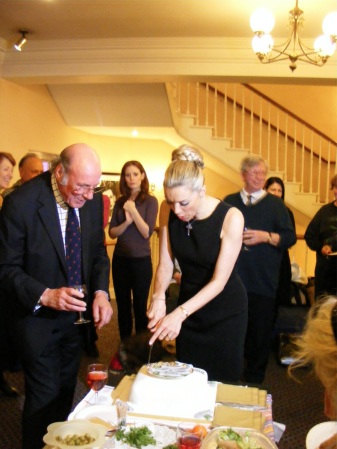 Other cast members present for the annual ceremony included Celia Imrie who as Dotty Otley makes several stage entrances and exits carrying a plate of sardines. This year's cake featured the Noises Off fish.

The cake is a light fruit mix with icing as enjoyed in the early 19th century on the last day of Christmas 6 January. Janie Dee described the cake as "rich" and, speaking for the cast at the Old Vic, added: "It has been a rich warm Christmas for us."

The event was organised by the Vic-Wells Association which has continued the custom started by Lilian Baylis in 1923. The famous theatre manager boosted fund-raising by asking guests to guess the cake's weight for a small fee.

The decoration was described as "the best yet" by Vic-Wells chairman James Ranger.

Those who have cut the cake in past years include Ian McKellen, Edward Hall and David Suchet. The first cake was cut by Lilian Baylis after it had been carried in a procession round the theatre.

This year's party was on the second floor outside the Lilian Baylis Circle.