King John at the Union Theatre

Despite being one of Shakespeare's least known plays, this production bursts at the seams with passion, humour and drama. 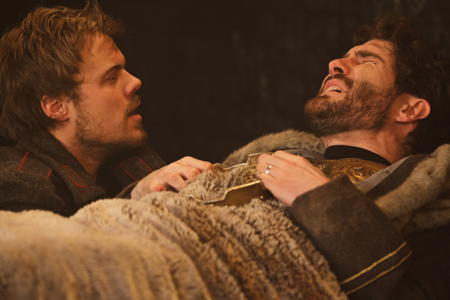 Where to begin with the plotline of King John? It involves at least five kings, dead or alive, two princes, one queen, one bastard son and various other members of the English and French gentry, all entangled in a convoluted plot so ludicrous it would not look out of place in a modern-day soap opera. It combines the usual traits of Shakespearean tragedy – greed, revenge and love – and adds to these the age-old rivalry between England and France, a topic as ripe for drama and laughs in Shakespeare's time as it is today.

Whilst the plot may not be one of Shakespeare's most acclaimed, his characters are fantastically realised and brought to life by this cast. His female roles are noticeably strong; the slanging match that takes place between the 'Granddame' Queen Elinor (Maggie Daniels) and her rival Constance (Samantha Lawson) is one of the play's most memorable scenes, as their male relatives look on in both awe and fear. Cardinal Pandulph (Michael J Hayes) is a great comic character, representing all that is wrong with religion when corrupted by power and excess. And King John may have been a weak king but he is far from a weak character – Nicholas Osmond brilliantly displays how his pomposity and haplessness combine to cause his eventual and inevitable downfall.

In such a small space, the staging has to be both sparse and deployed innovatively and this is achieved here with great success. The use, or at least threatened use, of a blowtorch is slightly terrifying on such a confined stage, but extremely effective. The production also deploys an excellent, and often tongue-in-cheek, soundtrack. The scene, in which King John is haunted by the ghosts of those he has killed, who dance to the strains of a waltz, is creative and, quite honestly, eerie.

The team behind King John and Union Theatre should be commended for taking on one of Shakespeare's least performed plays. There is a reason why his histories are performed far less frequently than his tragedies or comedies – quite simply, they are far less comic or tragic. Here, Shakespeare ambitiously attempts to compress decades of historical fact into a couple of hours of entertainment. Yet this production succeeds in translating a difficult script into an evening of memorable and accomplished performances.

This production of King John is undoubtedly good enough to be performed on a far larger stage. However, this would dilute the intimacy and power felt when viewed at the Union. Only a small audience may be able to view it every evening but, by rights, there should not be an empty seat in the house.