Borough High Street scaffolding to be dismantled after seven years

The scaffolding that has surrounded two buildings on Borough High Street for at least seven years is to be dismantled after a campaign by residents and councillors. 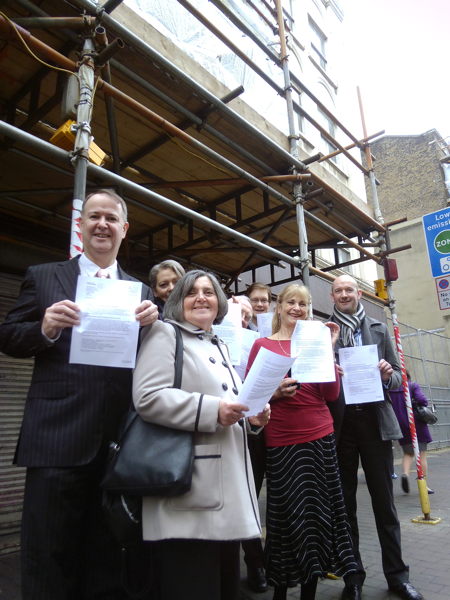 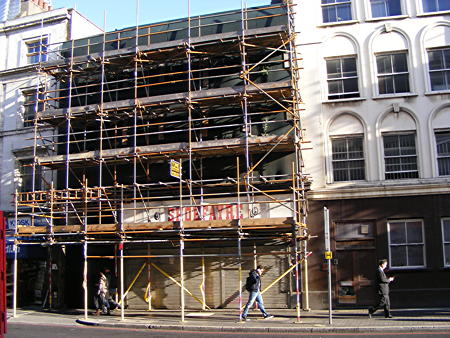 King's College London, which owns the former Shoefayre building at 129-131 Borough High Street and the nearby building at numbers 141-143 in the same street, has written to Southwark Council confirming its intention to remove the scaffolding in advance of this summer's Olympic Games.

For the past five months Cathedrals ward councillor David Noakes has worked with residents, Better Bankside and campaigning organisations including Southwark Living Streets and Boroughbabies, to urge council officers to take enforcement action against the college if it didn't take steps to improve the appearance of the buildings.

Now King's College London has confirmed to the council that it is planning to move the structural support inside the buildings, enabling the pavements to be cleared of scaffolding and returned to their full width.

If the project runs to time, work could start soon after Easter and be completed by mid-July.

KCL says that the internal reinforcement to the buildings is a temporary measure and it intends to redevelop the site in due course.

"Local residents and businesses have consistently told us what a blight this scaffolding is to our historic high street and the prospect that the Borough High Street will finally be scaffolding free is fantastic news," says Cllr Noakes.

"Southwark Living Streets has been actively campaigning since 2005 for improvements to the public realm, including all key high streets. Removal of the scaffolding means that TfL can complete the repaving works, so not only will the barnacles on the High Street be gone, pedestrians will be able to walk unimpaired. Hooray!"

The presence of the scaffolding meant that the pavement in front of the two buildings could not be upgraded during the recent resurfacing of Borough High Street by Transport for London. Southwark Council has agreed to ask TfL to bring the two sections of footway up to the same standard once the scaffolding has been removed.