Bingo at the Young Vic

Patrick Stewart gives a stellar performance as the world's most famous Bard, but this is Shakespeare as you've never seen him before. 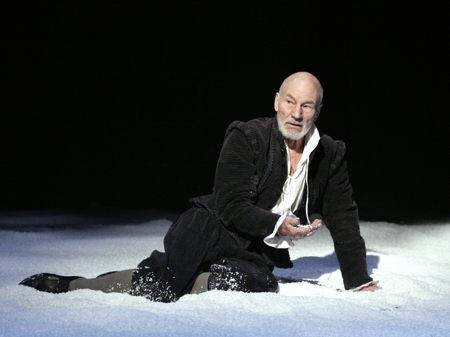 Following hot on the heels of Michael Sheen, another well-known face has taken up (a short) residency at the Young Vic. Sir Patrick Stewart has Shakespeare running through his veins, having joined the Royal Shakespeare Company nearly 50 years ago and since then having performed as some of his best-known characters. Yet in Bingo, instead of performing Shakespeare, he inhabits the playwright and lays him bare.

Shakespeare in portrayed in his later years, weary and worn down by life. His strained relationships with his wife and his youngest daughter have reached breaking point – he prefers the company of his servants or, even better, himself. In pursuit of an easy life, unbothered by monetary worries, he strikes a deal with the local landlord, resulting in the forced eviction and subsequent destitution of local peasants.

'Bingo' was written by the left-wing playwright Edward Bond and represents a criticism of capitalist greed. It is fitting therefore that the play has been revived at a time when 'responsible capitalism', or rather the lack of it, is the subject of much discussions amongst the political elite. Bond's Shakespeare displays elements of the moralising author hinted at in some of his most famous plays; Stewart's soliloquies reveal his angst caused by what he perceives to be declining standards and general decay within society. Yet he ultimately comes across as sheltered and self-indulgent, literally sitting in a walled garden whilst those around him struggle with matters of life and death.

Bond's play is focused overwhelmingly on the figure of Shakespeare and this focus is inevitably heightened by the casting of Stewart. Yet the rest of the cast still provide some memorable performances, most notably John McEnery as the Old Man and Catherine Cusack as Shakespeare's daughter. However, the rather simplistic economics of the play are mirrored by the simplistic, two-dimensional portrayal of most of the lower-class 'yokels'. This is much more a fault of Bond's writing than Angus Jackson's directing or cast members. Where simplicity really pays off is in the staging; the passing of time and season is beautifully represented.

Shakespeare has become such a revered figure in popular culture, it is enjoyable to see him knocked off his pedestal once in a while. As ever with Shakespeare's life, with Bingo it is difficult to tell when fact becomes fiction. However, questioning the factual accuracy of Bond's play is as unnecessary as questioning whether Shakespeare truly wrote all the plays that have been attributed to him; what matters is that Shakespeare's Complete Works and Bingo are representative of the life and times that they portray. And they remind us that some things never change; we all get old, families argue and capitalists continue to dictate the rules of the game.