The former PriceMark 98p shop at the Elephant & Castle Shopping Centre has been transformed into a temporary cinema showing an extraordinary film about one man's quest to understand the neighbourhood and what makes it tick. 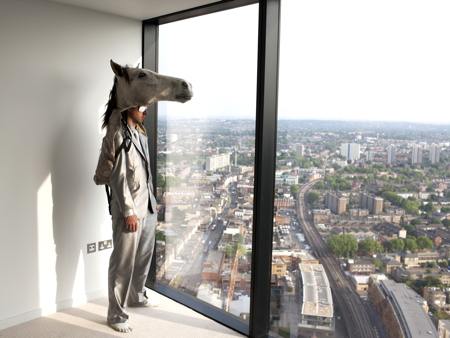 Visitors watch the film in a darkened room, cut off from the bright lights of the shopping centre but not from the noise of the cafes and shops outside.

The self-styled "shaman and showman" talked to residents, traders and council officials by way of research for his 2009 performance at the Coronet Theatre in collaboration with Chrome Hoof.

The film includes footage of Coates' visits to Southwark Council's offices with a stuffed buzzard on a pole. Members of the Elephant & Castle regeneration team are seen participating in Coates' vision quest exercise.

"I think that if you approach a conversation in a very different way – often I've got a costume or we are doing a physical thing together – then I think people are open to looking at problems in a different way, using their imagination in a different way and thinking about their own investment in the project," explains Coates. "That's what I was trying to do with the council."

Does Coates see his film as a work of art or a political statement?

"For me it was a very personal journey," he says.

"More than anything I was trying to understand what was happening here. Spending time with people, talking to people and gathering all that information that I did over those years was a massive part of it.

"I wasn't particularly interested in a certain agenda. I didn't feel that I was partisan in any way. I felt like I just wanted to understand what was happening and where it had all come from.

"And then when I performed that ritual on the stage [at the Coronet], certain scenarios came into my mind and those were the messages I wanted to get across.

Three years after embarking on his study of the tortuous regeneration of the Elephant & Castle, how does he see the future?

"I'm optimistic about change. I think everyone acknowledges there needs to be change here.

"But I'm pessimistic about what's going to be lost here.

"By spending time here, I'm valuing things now that are perhaps being overlooked a bit. The idea of mixed communities and the idea of historic communities here: I think that's a really essential part of Elephant & Castle. It's going to be very sad if that's totally lost.

"In a way that's the basis of the future of the Elephant & Castle. You can't just reinvent a society. You can't reinvent a community. I think that integration is going to be very important.

"Hopefully the developers and the council are more than aware of that and it will be taken into consideration, but with the financial constraints and the pressures, I'm a bit pessimistic about that."