A building company has been fined £20,000 for a breach of the Health and Safety at Work Act after a woman was injured while she waited at a bus stop in York Road near Waterloo Station. 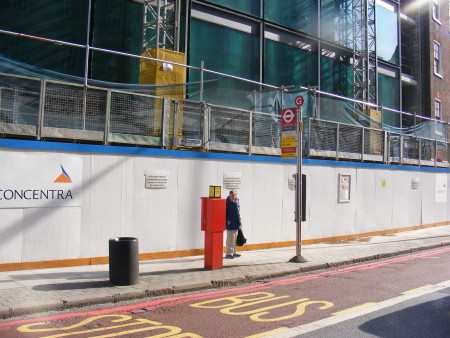 Concentra Ltd was prosecuted by the Health and Safety Executive after inspectors found that the incident on 26 September 2008 could have been prevented.

City of Westminster Magistrates Court heard this week how a member of the public was waiting for a bus on York Road when she was hit by a piece of machinery being lifted to the fifth floor of a nearby office block.

The woman suffered severe multiple injuries including several broken bones and cuts and swelling to her head. She was in hospital for eight days and the injuries have affected her work and studies.

The building was being refurbished and instead of traditional scaffolding being used on the site, a mast climber had been erected, which allowed workers to be raised and lowered on the outside of the building.

The HSE investigation found that a crane and lifting slings were being used to lift an air handling unit which weighed 380 kilograms. The crane was not fitted correctly and during the lift, the unit hit a mast climber and was knocked out of its sling causing it to fall from height and hit the member of the public.

"Concentra Ltd failed in its duty to manage the safety of persons affected by its activities," says HSE Inspector Bose Ogunsekan.

"A high risk activity such as using a crane to lift this sort of load on the site should have been fully risk assessed during the planning stages of the project.

"In addition, further measures that would have also protected members of the public from site traffic, such as an alternative pedestrian route and a temporary bus stop elsewhere, could have prevented injury to passers by."