Shakespeare in Art is at the Dulwich Picture Gallery for Dulwich shares with Bankside a strong link with Shakespeare and theatre. Edward Alleyn, part owner of the Hope Theatre, founded Dulwich College which still holds Shakespeare documents. 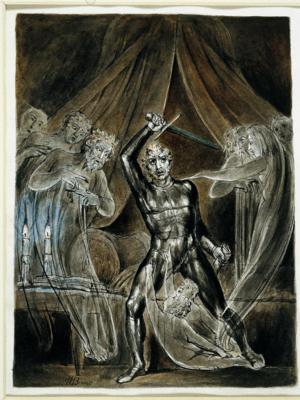 Sir John Falstaff, who lived near Potters Fields, can currently be seen portrayed in the Old Vic's Merry Wives of Windsor so it is appropriate to see Robert Smirke's painting of Falstaff under Herne's Oak. Also included is Hogarth's depiction him in Henry IV.

Nathaniel Dance shows us Garrick as Richard III. Later there is Edmund Kean in the role. Henry VIII is set on both sides of the river at Blackfriars so it is especially exciting to see George Henry Harlow's picture of Kemble as Wolsey with Sarah Siddons playing Queen Katharine.

Early Waterloo resident William Blake is well represented and in John Faed's 1850 painting we find Shakespeare and Ben Jonson in The Mermaid. Jonson had a world premiĂ¨re at the Bear Gardens but the pub was across the Thames.

So was the Fortune Theatre which the exhibition claims is in Southwark. However, this is a rare opportunity to see these seventy pictures together in one gallery.