British Transport Police officers are appealing for information after a man was shoved violently to the floor at London Bridge Station last month. 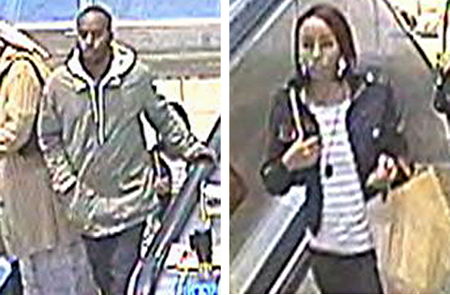 Police would like to speak to this man and this woman

Investigating officers have released a CCTV image of a man they want to talk to in connection with the incident, which took place at 7.53pm on Thursday 12 April.

An image of a woman, seen walking alongside the man after the incident, has also been issued.

The 40-year-old victim, from Purley, came down the escalators from the main concourse and was walking towards one of the London Underground entrances when he bumped shoulders with another man walking in the opposite direction.

As the victim continued walking the man turned around and violently shoved him in the back, causing him to fall to the floor and injure his shoulder, preventing him from getting up.

The man, seen walking away with a woman, then left the station.

"This violent and unprovoked attack left the victim dazed on the floor and with a serious injury to his shoulder, preventing him from being able to get up without assistance," says PC Shell Devito.

"We've made a number of local enquiries into this incident and are keen to speak to anyone with information, particularly if they recognise the man pictured in the CCTV image.

"We'd also like to speak to the woman pictured because while she played no part in the incident, she was seen walking away with the man afterwards and could have vital information about what happened."