HMS Belfast has reopened to the public after it was forced to close for nearly six months when the ship's gangway collapsed into the Thames. 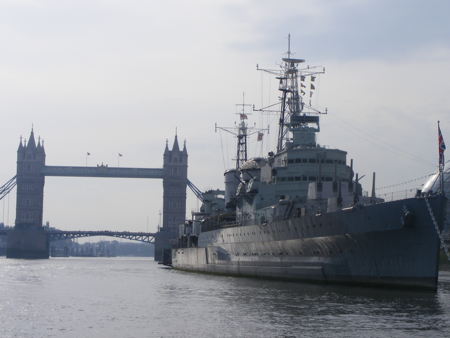 Weeks after last autumn's celebrations for the 40th anniversary of HMS Belfast's arrival in London, disaster struck on 29 November when a contractor working on the brow linking the ship to the bank of the Thames cut through the structure of the gangway causing it to collapse into the river.

No-one was injured but visitors and staff had to be evacuated by boat.

Director Phil Reed says that the last six months – when The Ship has been cut off from the shore – have been "pretty miserable" for the ship's staff.

"It's been a sad time because the ship's been sitting there all forlorn and unloved – but it's given us a chance to titivate it a lot inside which has been good," he told the London SE1 website.

"It's a great feeling being back and being open to the public again."

HMS Belfast will host a special weekend of celebrations on 26 and 27 May to mark the reopening of the attraction.

When the gangway collapsed the ships owners, Imperial War Museums, had just received planning permission for a new development which will take shape over the next six months.

"I'm hoping early next year we will open an entirely new building on the land side which will have a new cafe, new entrance, new shop and rooftop bar, which is going to be rather fun," says Phil Reed.