The Suit at the Young Vic

A poignant portrayal of love, life and death in 1950s South Africa, set against a backdrop of growing oppression and violence. 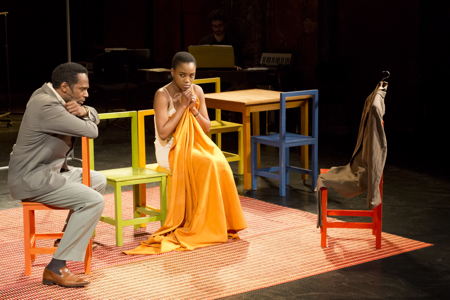 The Suit is a play of conflict and of contrast, of literal and metaphorical black and white. It centres on a marriage which, whilst outwardly loving and content, is deeply unhappy and loveless. Its setting is a convivial, united community, a representation at odds with the division and oppression it is about to face. Yet despite this – or perhaps because of it – the poetry and humour of Can Themba's writing provide its strongest and most affecting moments.

The peaceful harmony of Philemon's life is destroyed when he discovers that his wife loves another man. Unable to forgive or forget, he instead forces her to care for, feed and love the suit left behind by her lover. This suit becomes a constant and painful reminder of Matilda's indiscretions and its presence ultimately becomes too much for them both to bear.

The Suit's strengths lie in its simplicity. It is at its most charming when portraying the minutia of domestic life in Sophiatown, Johannesburg. The opening scene, in which Philemon wakes up and prepares breakfast for his wife, is witty and beautiful. Bare clothes rails convey all manner of structures: doors, homes, bus stops. The small cast is supported by a small band of musicians, who provide a captivating accompaniment to the acting and song.

The play is weaker once it moves beyond the dynamic of Philemon and Matilda's relationship. Some of the plot developments feel unnecessary and out of place; a party appears to be held for the sake of hosting a party (and as a vehicle to invite audience members on stage). Equally, the play suffers due to its length; it is too short to enable any real character development. Hence we do not get to understand Matilda and her love for her lover and her lack of love for her husband. We do not find out why Philemon, an intelligent and sensitive man, punishes his wife despite the fact that his actions force them even further apart.

This lack of opportunity for the audience to truly engage with and understand the characters' motivations is disappointing, as Nonhlanhla Kheswa as Matilda and William Nadylam as Philemon provide strong performances. Most notable, Kheswa – born in a Johannesburg township herself – dances sensuously with the empty suit in one scene and is humiliatingly forced to parade it in public in another. Her songs feel at times to have been included merely as a vehicle for her voice, but it is so accomplished and beautiful that all is forgiven.

This is a play teetering on the edge of apartheid. The town in which the play is set, and where its playwright lived and wrote his work, was destroyed during the brutally oppressive regime and its inhabitants relocated. But the spirit of the writing and its characters has survived and flourished.