The City & Country Farmers' Markets section of Borough Market, which opened 18 months ago, is to close this week. 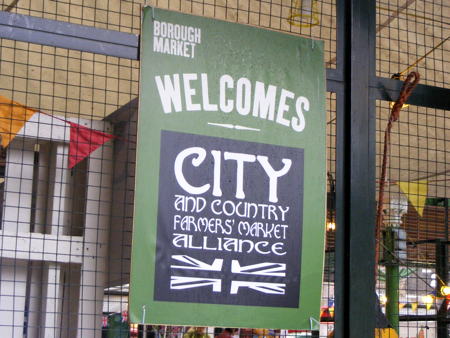 Small food producers affiliated to City and Country Farmers' Markets (CCFM) started trading at the end of 2010 in the section of the Jubilee Market which opens onto Cathedral Street.

The deal between CCFM and Borough Market brought a range of smaller farmers and producers, mostly from South East England, to prominent trading spots at the busy market.

Borough Market insists that the arrangement was always due to end when the Thameslink rail viaduct construction works are completed and many of the market's long-term traders return to Three Crown Square, leaving much of the Jubilee Market as a car park.

However, some traders brought to Borough by CCFM claim that they were unaware of the temporary nature of the contract between the two market operators and only learnt at the end of May that they would have to leave in mid-June, putting their livelihoods and suppliers' businesses in jeopardy.

Although some CCFM-affiliated traders have also applied directly to Borough Market for permanent pitches, they fear that the high volume of applications means they could be in for a long wait.

CCFM traders, who have chosen to remain anonymous, have launched a Twitter campaign to raise awareness of the situation and try to secure their future at Borough.

"Borough Market has been proud to welcome City and Country Farmers Market traders as guest traders over the last 18 months," said a spokeswoman for the market trustees on Friday.

"Their locally sourced offering has contributed to the overall diversity of the offering at Borough Market.

"CCFM were invited to trade at Borough Market for a limited time period, due to the change of use of the market space during the Network Rail construction works. As these works are now nearing completion, the market needs to return the area in which CCFM traders have been welcomed to its original use.

"This is to ensure continuity of trading at the market for our 100 plus traders. This is not a new or recent development. The agreement between Borough Market and CCFM was time limited from the outset.

"Borough Market has made clear to CCFM traders that they are welcome to apply to become full time Borough Market traders in line with our normal processes. We wish them well with their future business successes."

• CCFM's last day at Borough Market is due to be Saturday 16 June.

• The trustees of Borough Market recently received planning permission from Southwark Council to retain the temporary roof over the Jubilee Market car park area for a further five years. They say that the space will be used for special events such as this Sunday's Food + Art collaboration with Southwark Arts Forum.