A new study commissioned by the Corporation of London supports the introduction of a new cross-London tram service which would serve Borough High Street. 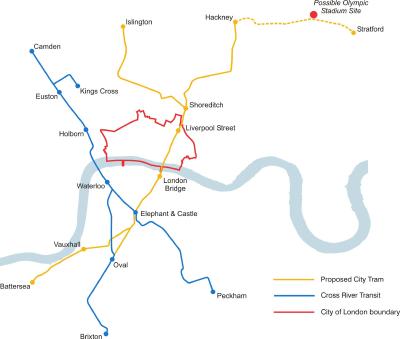 The feasibility study was commissioned in response to uncertainties around the funding and delivery of London's long-awaited rail projects – Crossrail, Thameslink 2000 and the East London Line Extension – which cost billions rather than millions.

The results of the initial stages of the study show that a City light rail scheme would be viable and compare well with other existing and proposed public transport schemes in London.

This scheme complements the Cross River Partnership's London Tram scheme between Peckham and Camden (via Waterloo), which will greatly relieve the overcrowded Northern and Victoria lines, cutting some commuter journeys by 50%.

Stage three of the study is now underway. This involves a more detailed examination of the feasibility of the chosen route and the preparation of an outline business case.

Graham Forbes, Chairman of the Corporation of London's Planning and Transportation Committee, said: "There is a desperate need for improved public transport in the City and we believe this new tram link will help. It would also make a major contribution to relieving overcrowding on key sections of the Underground and improve access to many proposed development schemes."