A Doll’s House at the Young Vic

It's appropriate that a major Edvard Munch retrospective is currently on show at Tate Modern, just down the road from the Young Vic. 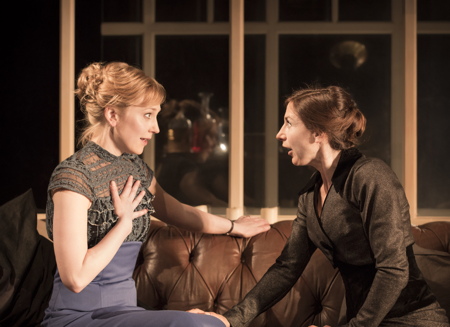 Ibsen and Munch were contemporaries and collaborators; both were critically acclaimed and criticised in almost equal measure. And, most notably, both sought to expose the truth lurking beneath the veneer of Norwegian polite society.

However, Ibsen had the edge over Munch in the latter respect. And A Doll's House is the best example of this exposition. The troubled marriage of Nora and Torvald shocked nineteenth century audiences and continues to cause modern day audiences to question their own relationships and behaviours. Almost regardless of the individual performances, Ibsen's charactisation of his two protagonists is so piercing and powerful that their personalities and symbolism have greater longevity than many other (more famous) stage characters.

Hattie Morahan as Nora and Dominic Rowan as Torvald are, thankfully, perfectly cast. And the Young Vic's set is ingenious and beautiful to watch, without distracting from the acting itself. However, the supporting cast are not so strong; Krogstad, the villain of the play, is not nearly sinister enough. And a number of misspoken lines suggest that a few more rehearsals are required.

This is the Young Vic's summer blockbuster. Many blockbusters pull in the crowds with their big names and then disappoint on quality. With a bit more polish, this performance of A Doll's House should continue to enhance Ibsen's legacy.