Murder in the Cathedral at Southwark

Apart from Canterbury Cathedral itself there can be no better stage for TS Eliotâ€™s Murder in the Cathedral than Southwark Cathedral. 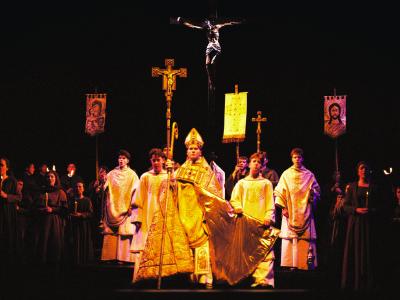 As the Women of Canterbury wail and worry at the front of the stage there is the image of St Thomas of Canterbury looking down from the stained glass window. The gathering dusk slowly obliterates the image of the martyr Archbishop who is now portrayed on stage by Matt Smith.

Smith, in this National Youth Theatre production, at first appears young but as the tension mounts he seems to grow in stature, height and age. Unlike some of the monks, Smith moves and even speaks like a confident but humble priest.

TS Eliot knew Southwark and so did St Thomas Becket who visited just three weeks before his death in 1170. On that early December afternoon the Southwark monks poured out of the priory entrance to welcome him just as the Canterbury monks do in the play.

The lighting and Geoffrey Burgon's music are good. Even the vestments and liturgical colours are convincing.

Eliot, unlike film-makers, got the story right. The performance takes place down the nave and in the intimate crossing. Later this month there will be performances at Westminster Cathedral which will be an interesting challenge to the company. But this play should first be seen in the intimate Southwark Cathedral where the architecture is sympathetic and where the stones have such resonance.