A pupil from St Saviour's & St Olave's School near Bricklayers Arms will abseil down part of the Shard next month at the invitation of Ffion Hague, wife of foreign secretary William Hague. 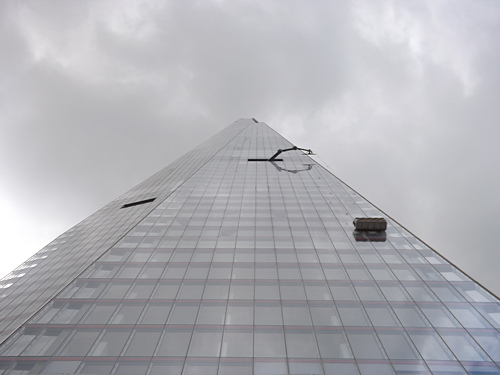 On Monday 3 September the Duke of York will lead 'The Descent of the Shard' in aid of the Outward Bound Trust and the Royal Marines Charitable Trust Fund.

Mrs Hague, as deputy chairman of the Outward Bound Trust, has invited Chloe Funnell to complete the final section of her descent of the landmark tower.

"I will abseil from the top of the Shard down to floor 28," explains Mrs Hague.

"I'm planning to donate the last 8 floors (we can't go lower than floor 20 without abseiling through the roof of London Bridge Station) to Chloe, a 16 year old who lives and goes to school in Southwark.

"Chloe went on an Outward Bound course at Aberdyfi four years ago and is much braver than me! It's my pleasure to involve her in our big adventure."

Chloe Funnell said: "I was lucky to attend an Outward Bound course in North Wales where I learnt lots of team building skills and took part in activities that I wouldn't do living in a city.

"I am very nervous but excited and looking forward to the challenge of abseiling The Shard. I would like to thank Mrs Hague for this fantastic opportunity."

Others taking part in the abseil include TV presenter Suzi Perry and Richard Oldfield from PricewaterhouseCoopers.

"Taking part in The Descent of the Shard is particularly poignant for us because it's built on the site of PwC's former headquarters in Southwark," said Mr Oldfield.

For over 25 years we've been supporting the development of people and skills in the borough, and it's often been the starting point of our most successful youth support programmes nationwide."