85 floral designers have created displays for the Leprosy Mission Festival of Flowers held this week at Southwark Cathedral. 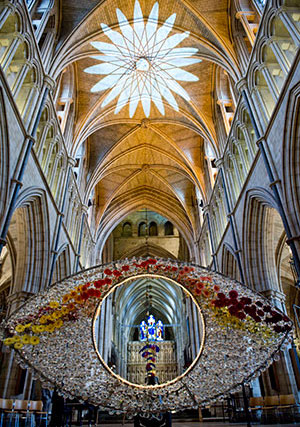 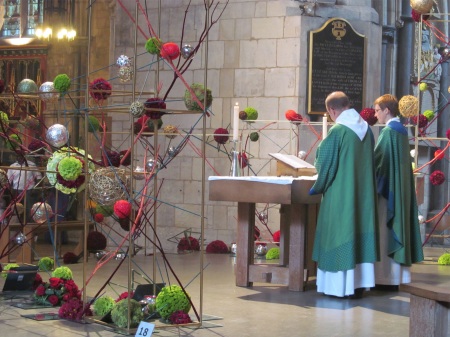 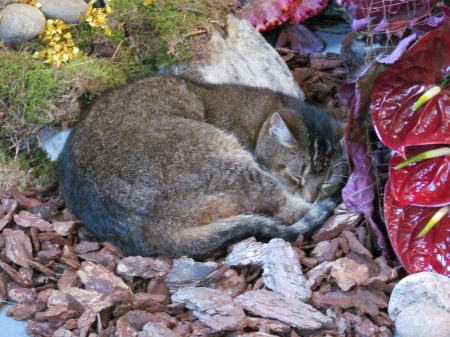 Cathedral cat Dorkins slept in an arrangement during morning service 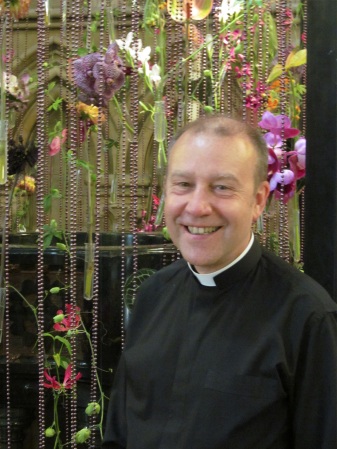 Dean of Southwark Andrew Nunn by the font

Under the direction of Mig Kimpton, a gold medal winner at the Hampton Court Flower Show, months of painstaking design has come to fruition and tens of thousands of flowers have been sculpted into works of modern art by a team of 85 designers.

They have drawn their inspiration from subjects including the Olympic Stadium, William Shakespeare and the blossoming of the earth.

Contemporary and avant-garde displays, suspended from nave ceilings, nestled in alcoves and woven into pastoral scenes lead onlookers through a floral journey of colour, perfume and imagination around the cathedral

The event is being held in aid of the The Leprosy Mission England & Wales and organisers hope to attract 8,000 visitors.

"We have a cause and a passion to support people affected by leprosy – a disfiguring and disabling disease for which people are often stigmatised as a result," said national director Peter Walker.

Artistic director Mig Kimpton said that it had been a privilege to let his imagination 'run riot' for the past three years to create a design brief for his team based on the theme of 'transformation' to reflect The Leprosy Mission's work.

"My dream and aspiration was to create something totally unique," he said.

"Flowers are an important part of our life – they turn a house into a home and bring a smile to the face."

• Today – Sunday 26 August – is the final day of the show. For details see www.tlmewfestivalofflowers.org.uk