Three Sisters at the Young Vic

This contemporary take on the much-performed classic retains its original profundity and humour, whilst displaying beautiful execution and innovative staging. 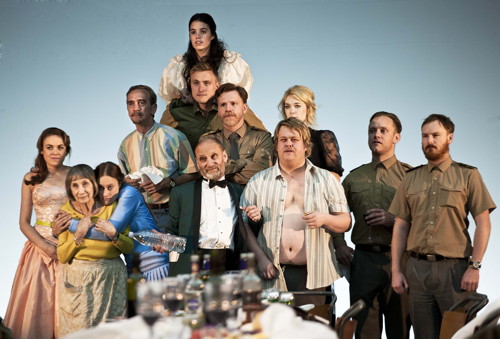 Our fascination with nineteenth century Russian literature appears to be unwaning. In contrast to the majority of productions of Tolstoy's, Dostoevsky's and Chekov's masterpieces (including the most recent cinematic take on Anna Karenina), this staging of Three Sisters strips away much of the sense of the opulence of pre-Revolution Russia. The staging is stark and bare and the script is littered with modern references (to the extent that, at one point, a reference to Moscow is accompanied by a 'Mobot').

Yet the oppressiveness of Russia, at a time when the pace of social change was gathering, is felt throughout. The three sisters in question – Olga, Masha and Irina – are sophisticated, intelligent young women, but their circumstances and upbringing have trapped them in a world of boredom and snobbery. They dream of escape but, without means or independence, they are destined to remain unsatisfied and frustrated. The cast of eccentric characters who inhabit their small world seek to lift their spirits, yet ultimately crush them.

The Young Vic's Three Sisters is excellently acted; most critically, the three sisters themselves are well cast and extremely convincing. But it is Danny Kirrane as Andrey (the brother who disappoints his sisters' ambitions) and Emily Barclay as Natasha (whose fortunes improve as those of the sisters' decline) who provide the most memorable performances. The direction and design is also compelling. Wonderful imagery is deployed – notably, the tableau created when all characters group to have their photograph taken, and the masks gathered and then discarded for a party which never takes place. Irina, in her desperation to reach Moscow, creates a tower and reaches fruitlessly into the bright abyss hanging above the stage. Poignantly, the stage is gradually dismantled during the second half of the play, as the world of the three sisters falls apart.

The director, Benedict Andrew, could have taken one further liberty with the original text; the production loses its way for part of the second half and should have been further shortened. Yet overall, Andrew's Three Sisters manages to make this challenging play approachable and relevant whilst ensuring that none of its profundity is lost.