Crackdown on dangerous drivers and cyclists at key Southwark junction

Cyclists who jump red lights and motorists who stop in areas reserved for cyclists were targeted in a joint operation by the Metropolitan Police and Southwark Council last week. 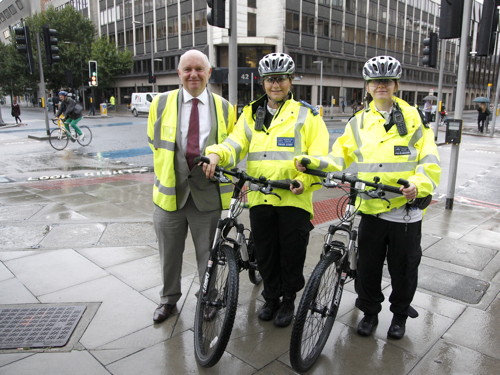 The operation took place at the junction of Southwark Street and Southwark Bridge Road during the morning and evening rush hour on Wednesday 26 September.

A number of spot checks at other locations around the borough are planned in the future.

The aim was to catch and warn cyclists about the risks of jumping lights as well as educating drivers who ignore advanced stop lines (ASLs) reserved for cyclists. Drivers caught in this junction face fines of up to Ł60 as well as three penalty points on their licence.

One cyclist was issued with a Ł30 penalty notice for ignoring a red traffic light and a further 30 cyclists and 25 motorists were given advice.

"This was a planned operation with the police designed to raise awareness and reduce the number of road traffic collisions between pedestrians, motorcyclists and cyclists," said Cllr Barrie Hargrove, cabinet member for transport, environment and recycling.

Inspector Mark Johnson said: "Cycling is one of the five main priorities of the Safer Transport Team, and with more cyclists encouraged to use the roads, we are committed to making their journeys as safe as possible through education and enforcement."

Cllr Hargrove added: "I recognise the need to deal with cyclists who commit violations like jumping red lights and cycling on pavements, but at the same time I have been urging the police to do more about irresponsible and unacceptable driver behaviour, like stopping in advanced Stop line spaces reserved for cyclist safety.

"The bottom line is we are fully committed to ensuring that our traffic routes are safe and free of intimidatory traffic for everyone who travels across the borough by bike, car or foot."