Freight ship MS Adeline christened in the Pool of London

A new 152-metre freight ferry has been christened in a ceremony held in the Upper Pool of London near Tower Bridge. 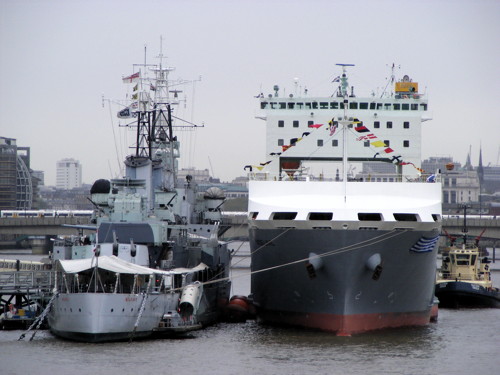 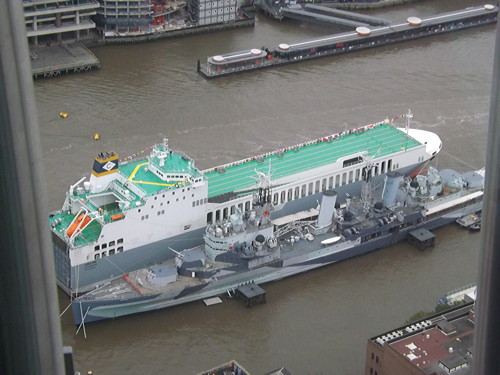 The two ships seen from the Shard 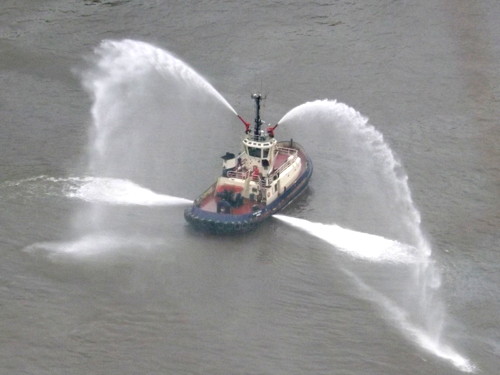 MS Adeline, the latest addition to CLdN's fleet of ro-ro freight vessels, was build in Japan and modified in a Chinese shipyard.

She is the latest of 4 vessels built by the Japanese yard for CLdN with sister vessels Capucine, Severine and Wilhelmine having already joined the fleet in 2012.

Adeline was berthed alongside HMS Belfast for the ceremony which was led by Revd Gordon Warren from the deck of the Silver Sturgeon river cruiser.

As CLdN is a Luxembourg-based company, the ship's godmother is the Hon Alice Walpole, British Ambassador to the Grand Duchy.

The ambassador concluded the formal ceremony by naming the ship and breaking a bottle of champagne against the vessel's hull.

Adeline will operate on sailings from Purfleet to the Netherlands and Belgium.

The CLdN freight routes have been used to bring construction materials to London for large-scale developments including the Shard and Wembley Stadium.

"Adeline, while not as large as recent additions to the CLdN fleet, clearly demonstrates that a mid-size ro-ro ship can still offer operational efficiencies for the freight market," said CLdN managing director Gary Walker.