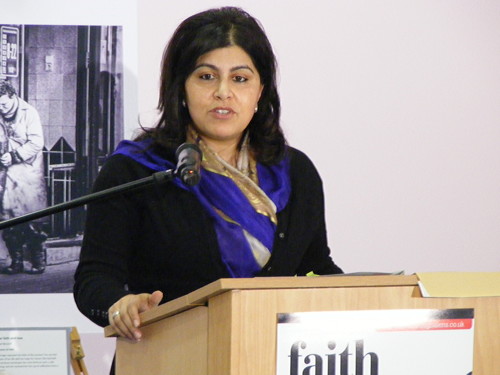 The minister was outlining her thoughts on the faith agenda at the Together in Service event held at the Coin Street neighbourhood centre on Tuesday afternoon.

The event was intended to highlight social action work undertaken by faith communities under the Year of Service initiative. Locally, Southwark Cathedral and the Kagyu Samye Dzong Tibetan Buddhist Centre have both hosted interfaith events during the year.

"These projects and many more prove that faith motivates good works," said Baroness Warsi. "And today you have a government that doesn't deny that fact.

"You have a government that supports, celebrates and in my case shares that motivation. A government that does God. Because we know that people who 'do God' do good things up and down the country every single day."

Speaking about stronger communities, the minister said that she had her own theory on interfaith.

"It's that if you are stronger in your identity then you are more tolerant of others. Those who don't associate with people of other beliefs because they think it somehow weakens theirs – they have got it the wrong way round.

'Because if you're a person who unites with people of other faiths for a common goal – it doesn't make you less of a Muslim, less of a Hindu, less of a Jew – it makes you more of one. In fact, there is no more powerful demonstration of one's security in one's identity.

"That's why I went to the Vatican earlier this year and argued that Europe should be stronger in its Christian identity. The Christian heritage of Britain is what has made me feel comfortable here in practising my faith."

Afterwards the minister was present at the Faith Through a Lens awards ceremony also held in the Stamford Street building.

Photographers were invited to exhibit work capturing a special moment demonstrating the faith that exists within a community. Among finalsits was Elija Paul Villanueva who exhibited a picture of a man on the south end of the Millennium Bridge who had been given food and money by passers-by.

Paul Triller was overall winner for a portrait of two former drug addicts.

"They had been physically saved because of a Christian ministry and spiritually saved through relationships within a local body of believers," he explained.