Thousands of people visited the South Bank and Bankside this weekend to take part in the fifth Mayor's Thames Festival. Here's our roundup of the weekend in words, pictures and video. 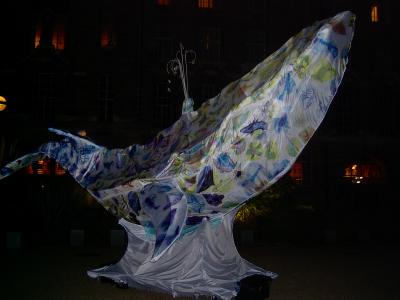 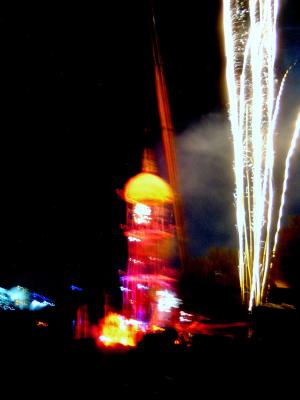 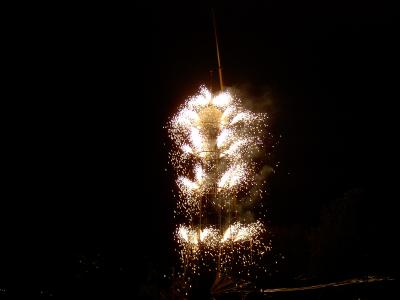 Saturday evening climaxed with Sticky, a mix of theatre, pyrotechnics and live mix soundscape in Jubilee Gardens by the award winning Improbable Theatre and master pyrotechnicians The World Famous. Featuring a shimmering 100ft tower of light and fire made from sticky tape and sparklers, the tower rises before the audience, then explodes in a blaze of shooting stars and Catherine wheels – releasing a huge winged insect. As pyrotechnician Mike Roberts says, "A sparkler's the simplest firework there is, but it's an entirely different effect when you light 400 of them at once."

Sunday night culminated with the annual Procession of Lights, involving 50 artists working with 2000 participants, many of them children, to create a spectacle of music, dance, lanterns and costumes.

This year's procession was called Midnight Menagerie and included the fruits of a collaboration with the Indian Government in Kolkata and the Indian High Commissioner in London to create Din Shuru, an Indian Carnival, with a 7m long ornamental boat made entirely of light bulbs as a centrepiece, which has been brought over from West Bengal to London.

Mayor Ken Livingstone said: "The river is a symbol of the capital's trading and seafaring heritage and the festival a wonderful celebration of its central role in the life and history of our great city. Events like the Thames Festival bring together people of all ages and backgrounds and enhance London's international reputation as a cultural and arts destination." 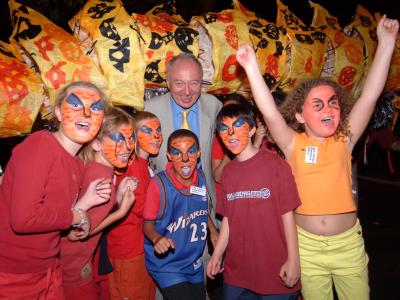 The Mayor of London at the Procession of Lights(Photo: Hayley Madden)

The Mayor – who attended the festival on Sunday and hosted a reception on board HMS President – added: "The Thames Festival underlines the progress London is making towards becoming an exemplary sustainable world city. In the 1950s the Thames was filthy and increasingly unable to sustain life. Over the past few decades there have been amazing improvements and we've now got one of the cleanest rivers of any major city, with around 118 species of fish recorded. This is a great legacy for future generations."

Firing on the foreshore 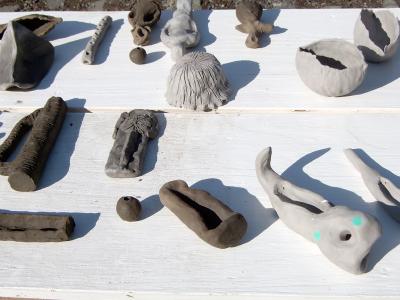 As part of the Thames Festival on Saturday night volunteers from the Crisis Skylight Arts Centre based in Commercial Road over the river made a variety of 'creatures of the night' from Thames river clay as part of 'Firing on the Foreshore'. Bankside STEWards, with a watching brief on the southern foreshore between Blackfriars and London Bridges, Fiona the archaeologist and the Crisis artists constructed a stone circle on the beach for the base of a fire. 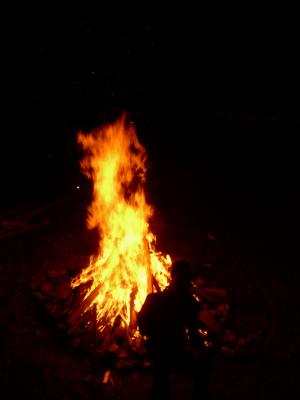 In a traditional way, the clay objects were buried in sawdust and covered with netting, then a huge fire was built on top with driftwood provided by Thames 21. Musicians and fire dancers saluted the conjunction of darkness, fire and water. The fire burnt for nearly six hours until it was extinguished by the incoming tide in the early hours of Sunday morning. 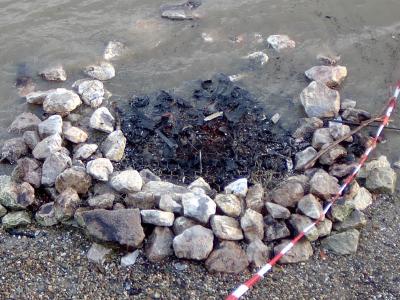 Low tide at at 8.30am saw everyone gathered expectantly to view the results of the experiment. In spite of the great heat of the fire it had not actually been hot enough to fire most of the pieces and the sawdust had become too damp to burn. 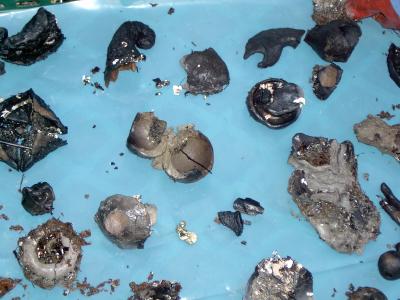 Soon everyone was full of ideas of how to improve the experiment for next year. Watch this space! 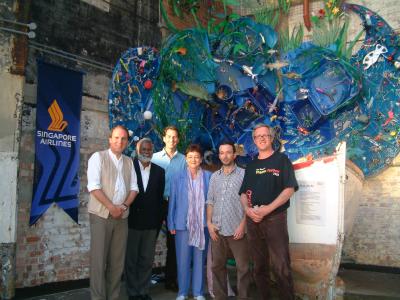 At the Thames Festival Singapore Airlines unveiled the spectacular River of Life Mural, a strikingly colourful and tactile sculpture made entirely from recycled materials collected from the Thames foreshore.

The River of Life Mural has been part funded by Singapore Airlines who held, in conjunction with environmental charity Thames 21, a series of summer workshops for local children from the SE1-based volunteer group Family Links. Under the guidance of specialist artist Kevin Herlihy, young members of the Waterloo community have produced a visionary representation of the thriving River Thames. The mural has been permanently mounted in the courtyard behind Oxo Tower Wharf in Barge House Street.

Thames21 director Mark Lloyd said: "The River of Life Mural Project was designed to capture the attention and imagination of children living in the Waterloo area and raise young people's awareness of the importance of keeping the Thames clean as well as demonstrating the value of recycling."

Family Links is a charity working with young people and families in the SE1 area. Volunteers run family and youth projects to broaden the horizons and raise the aspirations of local children. The charity believes that the art workshops and the completed mural will foster children's sense of ownership of their local area whilst also serving an educational purpose by teaching them the need to protect the environment.