Customers at the HSBC bank in Borough High Street were taken hostage during an armed robbery on Monday morning. 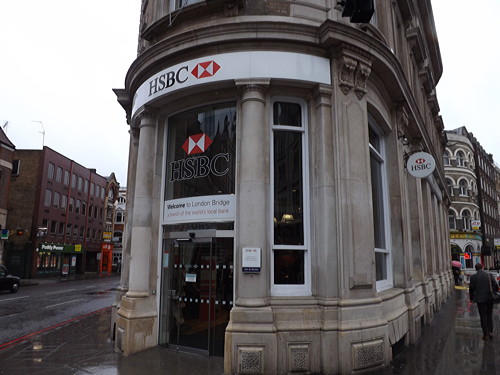 Police were called to the bank at the junction of Borough High Street and Southwark Street at 9.25 on Monday morning.

A Scotland Yard spokesman said that a man had gone into the bank where he was greeted at the front door by a member of staff. He produced a small black handgun from his jacket and pointed it at staff in the lobby.

The man then approached the cashier windows and declared the customers inside the bank to be his hostages. He passed the cashier a transparent orange cash bag to fill with money which he then asked to be put inside his rucksack.

Police say that as the man walked away, he reached inside his pocket and pulled out a handful of paper stamped with a Mickey Mouse logo which he threw into the air and shouted "Merry Christmas" before leaving.

The suspect's details were circulated on police radio and police community support officers from Southwark's safer transport team were in the area and reported seeing a man fitting the description.

Armed officers from the Met's diplomatic protection group used the information from the PCSOs and at 9.42am detained a man at a nearby cafe. Cash and a firearm were recovered.

The 43-year-old man was arrested on suspicion of robbery and taken to Peckham Police Station. He has since been bailed to return pending further inquiries.

The investigation is being led by the flying squad.