Nell Western, for many years caretaker of Hankey Hall on the Tabard Gardens Estate, has died aged 76. 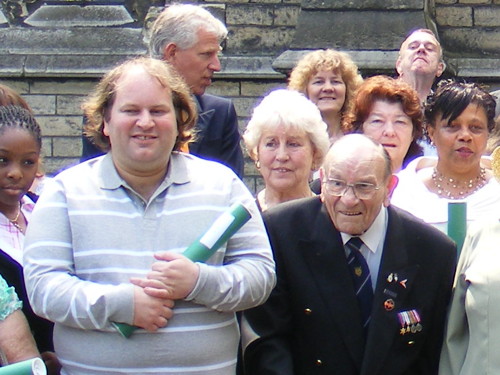 Nell Western (centre) at the Southwark Civic Awards in 2008

Mrs Western died on 2 January after suffering a heart attack. She had earlier contracted the norovirus.

A lifelong Southwark resident, she was born in 1936 in Milcote Street as one of 16 children. She attended Charles Dickens Primary School and Laxon Street School.

She married Terry in 1955 and they recently celebrated their 57th wedding anniversary.

The family has lived on the Tabard Gardens Estate since 1976 and Mrs Western soon became fully involved in community life, acting as caretaker for Hankey Hall and organising activities for the elderly.

In 2008 she received the honorary Liberty of the Metropolitan Borough of Southwark at the Southwark Civic Awards.

More recently she raised the first £1,000 towards the David Idowu memorial bench which was unveiled in Tabard Gardens in 2011.

"Nell strove to stick together a community of young and old from every background, making sure that noone was left without," said her granddaughter Leanne.

"The Borough has lost a rock and the community has lost a great lady and will miss her very very much."

Simon Hughes MP said: "Nell not only did tireless work for her family and community over many many years, but she has set an example for the next generation to follow.

"It is people like Nell who are the glue of our South London communities. I am privileged to have known her and worked with her and her legacy will last for a very long time."