62 black and white photographs of London and its varied multicultural life adorn the walls of Bankside Restaurant for the month of October. 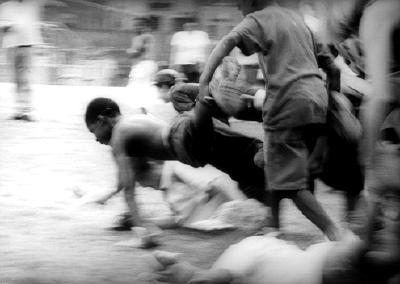 Steve Hollingshead deals in telling juxtapositions: extravagant carnival costumes pictured against the Elephant & Castle flats or a hearse alongside a lively billboard on Blackfriars Road. Some of the most successful are those involving water: the textured river surface framed by kayak and heron, a small boy standing in a large puddle, umbrellas silhouetted in rain on the Millennium Bridge. Others exploit the sunshine and sharp contrasts of the urban landscape. 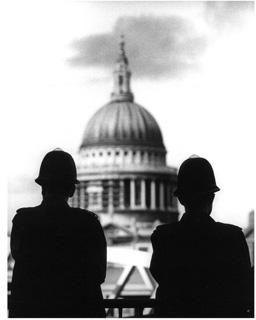 Nearly half of the photos are in SE1, the others all pretty central and covering the New Year Parade, Carnivals and the Thames Festival among other festivals. They are on sale with 15% of revenue donated to the restaurant's charity Action for Blind People. They can be purchased in three sizes and framed or print only. Borough Market at Night (number 40) shows the uninterrupted view of the illuminated cathedral tower as we shall never see it again, now the relocated Floral Hall intrudes on the Park Street view.