A shopkeeper has been ordered to remove his "makeshift" kiosk from the pavement at Elephant & Castle after a planning inspector ruled that Southwark Council was right to take enforcement action. 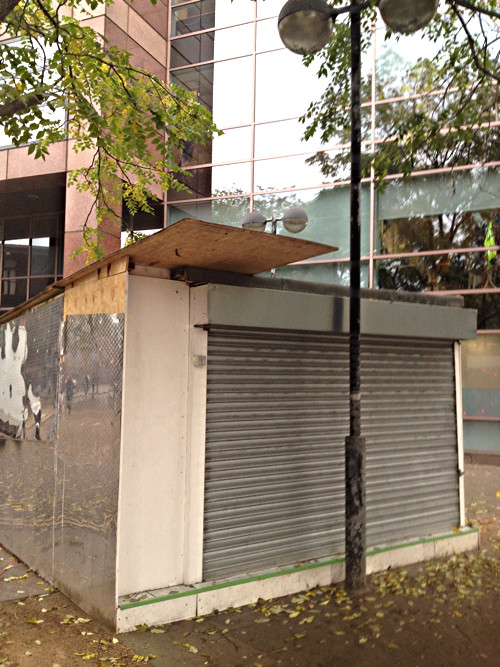 Trader Miroslav Radu moved his kiosk from London Bridge to the section of pavement outside Skipton House in London Road in July last year but did not obtain planning permission for the structure.

Last Monday planning inspector Gareth Symons heard evidence at a public hearing after Mr Radu appealed against Southwark Council's enforcement notice ordering the removal of the kiosk within a week.

The shop has been closed since the council issued a stop notice last summer.

On Friday the inspector's decision – dismissing the appeal and upholding the council's enforcement notice – was published.

"The steel and timber structure has a makeshift shoddy appearance that looks entirely out of place with the quality of the space and the designs of its built surroundings," wrote Mr Symons.

"It is accepted that small retail kiosks would not necessarily replicate the design of nearby buildings or use the same materials.

"However, even in the context of smaller scale street furniture such as the nearby bus shelters and telephone kiosks the appeal structure is undoubtedly an incongruous feature that detracts significantly from the character and appearance of the area."

The inspector was not convinced by claims made at the hearing that the structure is obstructing the pavement: "The kiosk does not materially increase the risk to the safety of pedestrians and cyclists in the locality," he wrote.

Mr Symons also dismissed fears that the kiosk could provide space for muggers and pickpockets to hide: "The possibility that the siting of the kiosk might increase the risk of crime is based on speculation without any substantive evidence to back up such concerns."

The inspector acknowledged Mr Radu's bewilderment that he had been ordered to remove the kiosk by one department of Southwark Council just weeks after its markets and street trading team had encouraged him to move to London Road from his previous pitch at London Bridge.

He wrote: "... the street trading circumstances have no bearing on the planning merits of the case, even though it must be frustrating to the appellant that he now finds himself caught in between two different arms of the council that did not at the time seem to be coordinated."