The owner of a former community centre which was partially demolished nine years ago has been told by Lambeth Council that it must clean up the overgrown and semi-derelict structure. 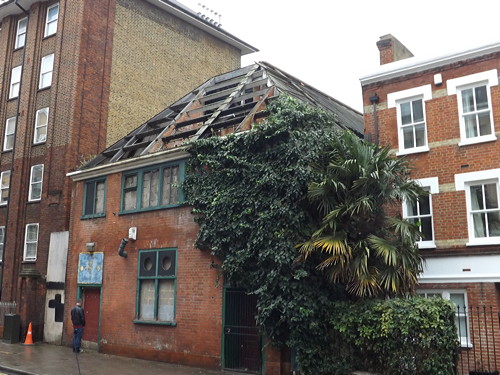 The Cornwall Club in Cornwall Road was used by local Scouts, Girl Guides and other community groups until its closure for redevelopment in 2004.

The building has remained semi-derelict ever since and the Cornwall Club charity was deregistered in 2008.

The land is currently owned by Eurotop Enterprises.

The building's fate was raised by Bishop's ward councillor Peter Truesdale in a written question tabled for a recent Lambeth Council overview and scrutiny committee meeting.

"The Cornwall building in my ward has been deliberately left empty for many years by the owners looking ghastly, blighting the area and damaging adjacent buildings," said Cllr Peter Truesdale, who asked council officers what action they planned to take.

The council's director of planning, regeneration and enterprise Sue Foster told the meeting that the authority had recently issued a notice under section 215 of the Town and Country Planning Act requiring the building's owners to tidy it up.

She also indicated that court action would be initiated by the council if the owners failed to respond to the section 215 notice.

The council's building control team had issued a dangerous structure notice in June 2010 requiring the removal, repair or securing of the building, but it had not been complied with.