Feast at the Young Vic

A spectacular journey through the history of the Yoruba diaspora. 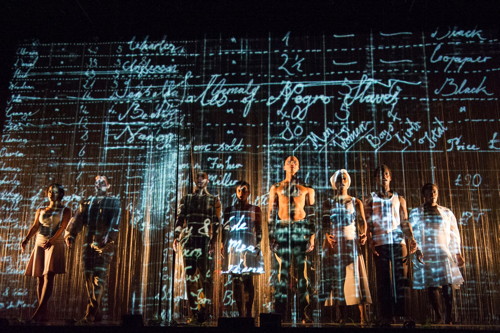 Danny Boyle's London 2012 opening ceremony sought to portray the history of Britain from the pastoral, pre-industrial revolution era to the present day. Many thought this would be unachievable. Compressing epic social and cultural shifts into one stage production is certainly not for the faint hearted. Boyle, memorably, proved his doubters wrong. The skilled creative team behind Feast equally prove that, not only is it possible, it can be spectacular.

Feast tells the story of the Yoruba people and their vibrant faith and culture, forcibly spread across the world by the slave trade. Writers from each of the five countries represented on stage created a succession of playlets, often in collaboration with the actors themselves, which span 300 years, from 1713 to the present day, across four continents.

If this all sounds like it will be a little messy and disjointed, it isn't. Continuity is provided by the reoccurrence of certain characters, part spiritual, part temporal, across the centuries. Coherence is provided by striking visual interludes, which depict the journey of Yoruba slaves across the Atlantic and their subsequent spread across the Americas and to Europe. The message is clear: circumstances may change, but the Yoruba identity remains strong to this day.

The video installations, and visual trickery, are stunning and compelling, demonstrating what can be achieved with multimedia, a technique which remains underutilised on the stage. Combined with dance and song, they create a heady mix of sound and colour, bringing to life the energy and struggle of the Yoruba.

In the quest for authenticity, some subtlety may have been lost. The songs, spoken in the native tongue of the Yoruba, could have benefitted from the use of surtitles to broaden the appreciation of their lyrics. Equally, some of the dialogue in the latter scenes was lost through strong accents.

For the Yoruba, self-knowledge is the key to existence. Whatever your circumstances, you must strive to understand your place within your culture. Feast gives us only a flavour of what it means to be Yoruban, but it is enough to keep you wanting more.