Medical students from London and Cardiff converged on a quiet Southwark back street on Thursday afternoon to protest outside the offices of national governing body for university sports. 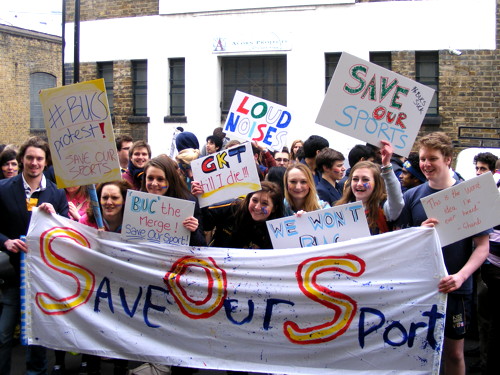 Medical students from Guy's and St Thomas' as well as other London medical schools – and a busload of students from Cardiff – took part in the demonstration outside the offices of British Universities & Colleges Sport (BUCS) in King's Bench Street.

For historical reasons many medical schools continue to compete in university sports leagues as independent entities, despite being part of larger higher education institutions.

For example, the former Guy's, King's and St Thomas' School of Medicine is now part of King's College London.

At King's, students voted overwhelmingly in a referendum last year to maintain the separation between the sports clubs associated with the medical school and the parent institution.

However, students fear that plans by BUCS to streamline the rules will spell the end for the long tradition of medical school sports.

The campaigners cite practical concerns – with medics working to different timetables and often on different campuses from other students – as well as fears that any enforced merger of sports clubs would reduce the numbers able to participate in competitive sports.

The normally sedate setting of King's Bench Street became the scene of a lively protest on Thursday, with dozens of placard-waving protesters besieging the BUCS HQ.

"We were aware of the planned protest in advance and worked with the local authorities to ensure the necessary action and preparations were undertaken," said a spokesman for BUCS.

"As a business in a largely residential area we took our responsibilities to our neighbours very seriously and took every possible step to make them aware of the protest before it happened."

The spokesman added: "Some medical schools currently, and uniquely, hold full member status, even though they have merged in the past with another institution. Their students have additionally been permitted to compete in BUCS sports for both the medical school and the parent institution.

"In order to deliver our services fairly and equitably to all our members, whilst recognising that medical schools hold their heritage in high priority, and after an extended period of consultation, BUCS has offered medical school members the opportunity to continue as full members if they wish to, but competing under the same conditions as all other members – i.e. all medical school students compete only for the medical school.

"Alternatively, they may choose to be in the membership of BUCS as part of their parent institution, but compete in team sports as named medical school teams, still entering BUCS as a medics team but as part of the wider institutional team structure. The choice is an institutional one which BUCS does not seek to influence."