Members of the public who witnessed a violent assault on a man using a cash machine at Waterloo Station have been asked to contact British Transport Police. 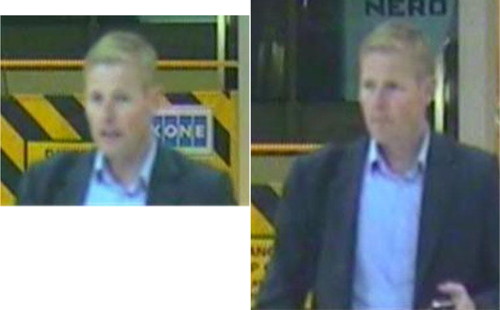 Do you recognise this man? Police believe he may be able to assist their investigation

The assault took place by the two cash machines at the Waterloo Road entrance to the station shortly before 1am on Friday 19 April.

Officers have now identified a man, pictured in these CCTV stills, who was at the station at the time and may have information which could assist them in their enquiries.

PC Vanessa Cadrecha said: "The victim, a 42-year-old man, was attempting to use the cash machine at the bottom of the escalators on the lower concourse near the entrance to the Jubilee line.

"After he had been using the cash machine for a few minutes, he was pushed from behind, causing him to fall face-first and hit his head on the ground.

"The suspect then used the cash machine himself, before running up the escalators towards the main station concourse."

As a result of the attack, the victim suffered a broken tooth which required extensive surgery, as well as injuries to his face, knee and shoulder, requiring time off work.

Officers are currently carrying out a number of enquiries in the local area to identify the person responsible, and are now calling on members of the public to help.

PC Cadrecha said: "This was a violent and frightening assault on a man who was just trying to make his way home after a night out in London, and has left him feeling shaken and vulnerable.

"It is vitally important that we speak to the man pictured to find out what happened, and I would urge him or anyone who recognises him to contact police immediately."

Anyone with information should contact British Transport Police on 0800 40 50 40 quoting background reference B6/LSA of 13/05/2013. Information can also be passed to the independent charity Crimestoppers on 0800 555 111.