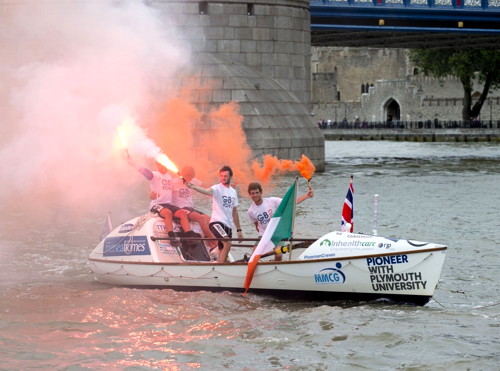 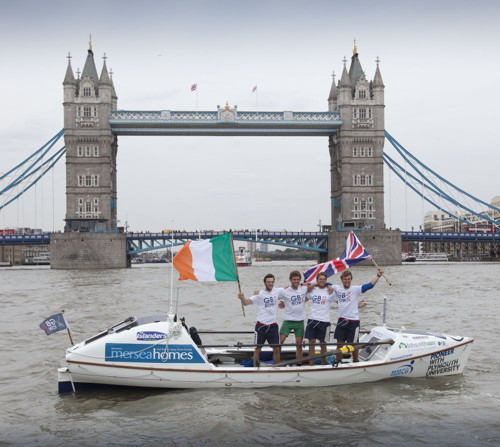 The crew – known as the Islanders because all come from islands – knocked 12.05 hours off the existing world record when they came home in 26 days 9 hours and 9 minutes.

The London Fire Brigade fireboat put on a display to salute the crew's achievement.

For setting that new record, skipper Josh Taylor, 23, Alan Morgan, 23, from Mersea Island, Essex, James Plumley, 24, from Guernsey and 25-year-old Gavin Sheehan from southern Ireland, won a £100,000 bounty from the organisers of GBRow 2013.

The crew has also been raising funds for the neurology and metabolics ward at the Evelina London Children's Hospital at St Thomas' Hospital on the South Bank.

On Saturday 1 June, six boats set off from Tower Bridge to race around Britain's mainland.

By the end of the first week, when the race reached Land's End, four crews had abandoned the race, mainly due to mechanical problems caused by rough seas.

The Islanders turned down medical assistance from a lifeboat when one of the crew, Gavin Sheehan, suffered a back problem while rowing in huge waves in the Bristol Channel.

They soldiered on, braving storms that snapped an oar, a live RAF bombing practice near John O'Groats and navigating through some of the world's busiest shipping lanes in a boat no bigger than a family car.

When they returned to Tower Bridge after nearly a month at sea, the four-man crew were met by family and well wishers at the Royal Naval Reserve base HMS President.

Chris Usborne, race director of GBRow 2013, said: "The Islanders overhauled the world record schedule in the last 24 hours – a fantastic effort after 26 days at sea."

Will de Laszlo, race President and skipper of the crew that set the previous world record in 2005 said: "It was an epic effort. Massive congratulations to the record-breaking team. I'm incredibly proud to be involved in an event that hopefully will inspire other people achieve great things."

One crew is still taking part in the race, Savoir Fair, rowed by Josh Tarr and Jason McKinlay from Salcombe, Devon who are currently near Aberdeen. They are expected back in London in about 10 days.