A Season in the Congo at the Young Vic

No piece of theatre could fully convey the horrors and injustices of the fight for Congolese independence. 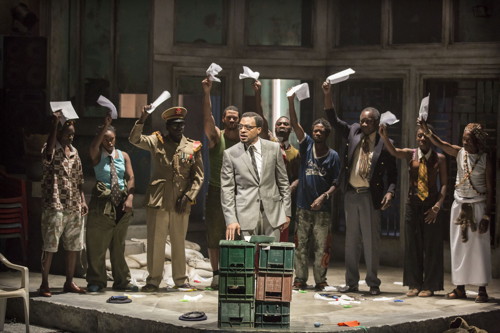 Yet this extremely accomplished and powerful piece of theatre emits an energy which does justice to the spirit of those who have fought to free Congo.

I'm going to hazard a guess that the life and times of Patrice Lumumba are little known in Britain. Knowledge of the history of the Congo is likely sketchy at best, and Patrice Lumumba featured in it for only a snapshot. A play based on his life, which must assume little prior knowledge, is therefore challenging to stage; not only must it give some sense of the man in the context of the country, it must also do justice to the grave wrongs and self-interested politics which have plagued Congo for centuries.

Director Joe Wright's production is aided by Aimť Cesairť's excellent 1966 script. This is the first time that this play has been seen in the UK, the first time it has been performed in English; a debut that has been a long time coming. Yet Cesairť's script alone would not have been enough. This play needs to convey the vibrancy and complexities of this vast country, the horror of the crimes committed there and the passion and personalities of those caught up in its power struggle. Wright succeeds on all counts.

Much depends on the performance of the actor playing Patrice Lumumba. Chiwetel Ejiofor excels at displaying the force and flaws of the central figure in this power struggle; in every scene, you feel his optimism, fear, innocence and strength. Kabongo Tshisensa also has an incredible stage presence, bringing the sounds of Congo to the Young Vic through his likembe playing and traditional song. White western soldiers and politicians are provocatively played by black actors, wearing long, snout-like noses, whilst grotesque spitting image puppets are used to portray businessmen and banks and America and China are represented by raptor-like skeletons.

Many who see A Season in the Congo may be unable to judge the accuracy and fairness of Cesairť play and Wright's direction. The events which unfolded in Congo during 1960 remain a source of debate and the need to compress a hugely complicated geo-political crisis into a few hours requires an over-simplification of situation and character. Yet the Young Vic's A Season in the Congo highlights the injustices suffered whilst celebrating the country and its people, and deserves to be one of the must-see plays this summer.