The Thankful Villages motorbike ride has stopped at the Imperial War Museum during its 2,500 mile journey. 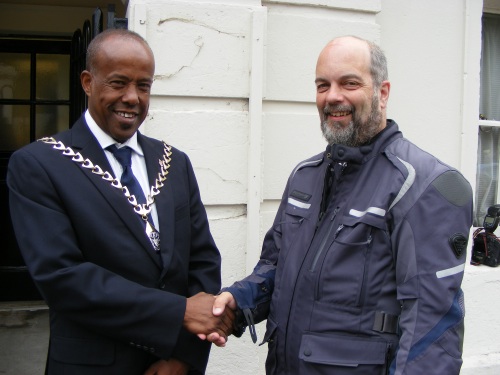 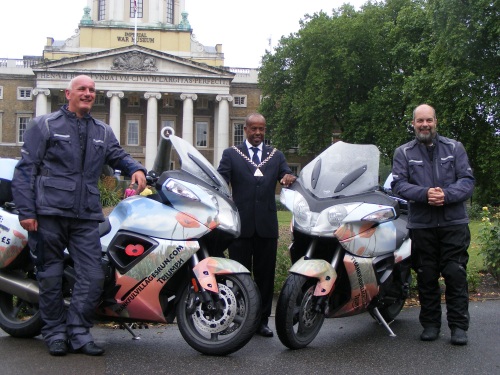 The bikers are visiting every one of the 51 villages which were able to welcome back all its First World War soldiers. These villages are unusual in not have a 1914-1918 war memorial.

Fourteen of the villages are Double Thankful because everybody who left for the Second World War also returned.

Medwyn Parry and Dougie Bancroft, who had the idea of the Thankful Villages initiative and are leading the ride on Triumph Trophy motorbikes, were welcomed to Southwark by the Mayor Cllr Abdul Mohamed.

Their journey started at Llanfihangel y Creuddyn, near Aberystwyth, at 8am on Saturday the 27 July and is due to finish at the same village at about 7pm on Sunday the 4 August. This will be the 99th anniversary of the outbreak in 1914 of the Great War.

Each village is being presented with a plaque which will be unveiled by villagers next year on 3 August, the eve of the outbreak of war centenary.

It is believed to be the first time anyone has visited all 51 villages in one journey.

The sponsored ride is raising funds for the Royal British Legion.

Each day a large number other riders have joined Medwyn Parry and Dougie Bancroft who for their ride into London on Tuesday morning were accompanied by a just a small representative number.

The day had started at Knowlton in Kent and, after visiting the Imperial War Museum, Horse Guards and 10 Downing Street, the bikers were due to join the others for stop at Puttenham in Hertfordshire.