The Lightning Child at Shakespeare’s Globe

'This performance contains filthy language and bare flesh,' says a notice outside Shakespeare's Globe where The Lightning Child is being staged. 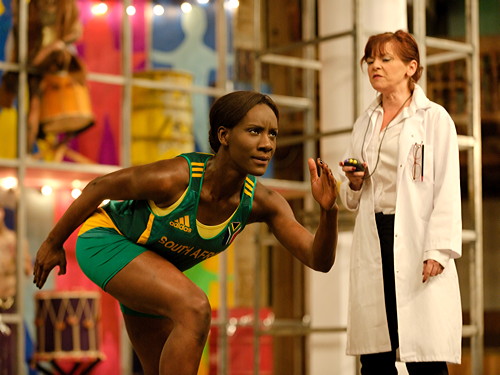 The F word is used to tell the audience to turn off mobile phones and is heard more times during the evening than it is possible to count. There is also is male stripping, crossdressing and suggestive dance as well as drug abuse scenes.

A play other than one by William Shakespeare can still seem a strange idea at the Globe but it does give one the excitement of the Elizabethan crowd who probably knew little about any play about to be performed. The Lightning Child might be billed as a remix of The Bacchae by Euripides but that gives no clue as to what you are about to see.

Ché Walker and composer Arthur Darvill present almost three hours, including interval, of entertaining confusion. "Don't worry if you get lost," we are told early on by messenger of the gods Ladyboy Herald played by Jonathan Chambers.

Several members of the audience left before the interval.

"Time is a many layered cake," adds Ladyboy after the production has opened with spacemen preparing for lift off. There is a mention of McDonalds. Both must be a first for the Globe.

But these modern scenes include a thrilling performance by Jess Murphy as a violinist with a difficult flatmate.

Finty Williams is outstanding both as a modern doctor and in the more difficult role of Agave.

Philip Cambus appears from time to time as a drug addict who might have just wandered into the theatre.