A pedestrian was taken to hospital on Friday afternoon after they were hit by a bus in London Road near Elephant & Castle. 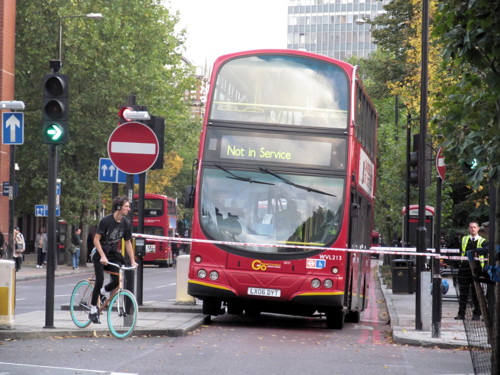 The northbound bus lane in London Road was closed for several hours after the collision which involved a route 1 bus operated by Go-Ahead London Central.

The incident took place at about 3.30pm on Friday near the pedestrian crossing near the junction between London Road and Garden Row.

The bus came to a stop with one of its front wheels on the kerb of the central refuge at the pedestrian crossing.

A Metropolitan Police spokesman said that the pedestrian had been taken to a South London hospital but their gender, age and condition were not known.

Last year Transport for London carried out a review of road safety on London Road. Earlier this year they resurfaced the contraflow bus lane and installed high-friction surfacing on junction approaches.